The Irish Times is providing a running tally of the state of the Fine Gael leadership race as it develops.

It is based on the latest information available and will evolve as voting intentions become clear or even change.

The contest will be decided using a weighted voting system across three electoral colleges – the parliamentary party, councillors and party members. Votes by parliamentary party members  (TDs, Senators and MEPs) have more weight than the other colleges. Rank-and-file members are given more voting strength than councillors, but substantially less than the parliamentary party. The running total below is calculated based on this weighting. For the purposes of the analysis, the membership vote is excluded because of the difficulty in polling roughly 21,000 people. However, we know that more than one-third of Fine Gael members eligible to vote in the party’s leadership contest are based in Minister for Housing Simon Coveney’s Munster heartland (see map below). Of course this doesn't mean all these members will necessarily vote for Mr Coveney.

The Fine Gael leadership contest will be decided by an electoral college which is split three ways between the parliamentary party – TDs, senators and MEPs – councillors, and rank and file members.

The parliamentary party holds the whip hand with 65 per cent of the voting strength, with councillors allocated 10 per cent and rank and file members 25 per cent.

Given that there are 73 members of the parliamentary party at present, each member represents 0.9 per cent of the total electorate. The Irish Times leadership tracker will update the strength of the overall vote for each candidate as members of the parliamentary party declare who they are supporting. For example, if a TD says he or she is supporting Simon Coveney, we will classify that person in the “definite” category for Mr Coveney and his share of the vote will increase by 0.9 per cent.

The same will apply for the 230 or so Fine Gael councillors around the country, although their voting strength is nowhere near as strong as members of the parliamentary party. Each councillor counts for just over 0.04 per cent of the total vote.

In the final days of the contest, The Irish Times will attempt to predict the votes of TDs, senators or MEPs who have not declared who they are supporting. Our estimates – based on journalistic research and analysis – will be reflected in the running total.

We may also put members of the parliamentary party in our “estimate” category if we believe individuals are leaning toward a particular candidate as the contest progresses.

The same principle will apply to councillors. It will not be possible to ascertain the views of the 21,000 rank and file members who have been Fine Gael members for two years and who are entitled to vote in the contest. 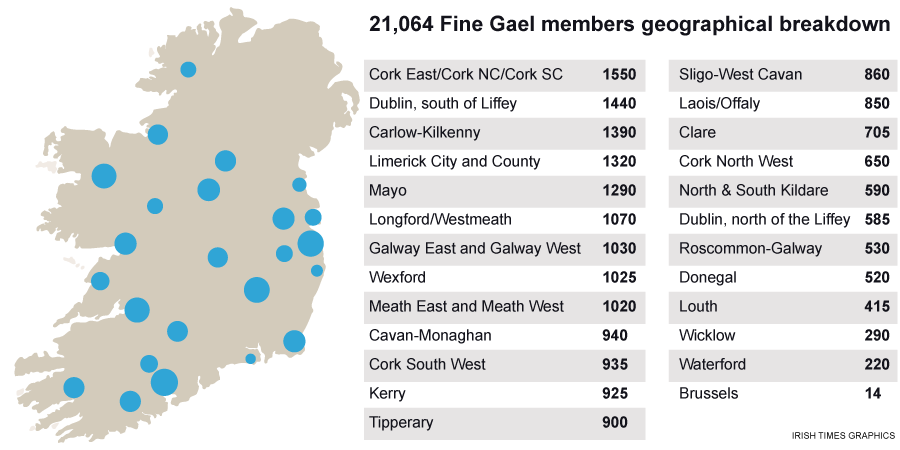 You can use our drop down menus to assess the levels of support for each candidate in each part of the electoral college, and also in individual constituencies and councils around the country so you can see who your elected representative is supporting.

The Irish Times leadership tracker will provide an overview of the keenly anticipated leadership race as it happens. Make sure you check back in with us regularly.