Seán Moran: Let’s leave the confusion aside and enjoy this All-Ireland

Misinformation and conflicting statements on elite sport have not helped anyone 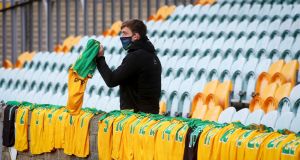 When it comes to predicting tsunamis, National Geographic cautions: “If you see the ocean receding unusually rapidly or far it’s a good sign that a big wave is on its way. Go to high ground immediately.”

This would have been good advice for the Croke Park officialdom as soon as Tánaiste Leo Varadkar’s revolving views of the world rotated to the point where he decided to decouple from the GAA.

Declaring that there would be no championship under Level 5 of the coronavirus restrictions, he added that elite sport might go ahead but would need to be bubbled up but that this “is difficult for the GAA in particular because they are amateur athletes”.

Further confirmation duly came with the announcement of Level 5 restrictions on Monday. In his address to the weary nation, Taoiseach Micheál Martin made no reference to sport at all and afterwards on ‘Claire Byrne Live,’ Minister for Health Stephen Donnelly was specifically asked about the exemption.

“Yes, so intercounty, professional and elite sports will go ahead. That was a recommendation of Nphet and it’s one we’re staying with,” came the minimalist answer before the subject was abruptly changed.

(Like the Spinal Tap concert where a tedious and unending composition ‘Jazz Odyssey’ is interrupted by the accusatory lead singer: “On bass guitar, Mr Derek Smalls. He wrote this.”)

It was all a long way from the ardent desire to get the senior championships up and running only a few weeks ago and the provision of €15 million to defray their costs.

It’s fairly clear that the irresponsible misbehaviour of various clubs winning county titles and the consequent clustering of Covid in those areas created an atmosphere of recrimination and although the GAA cut off the problem at source by discontinuing the county championships, it was too late and the damage was done.

Suddenly the benefits to national morale of staging the All-Ireland and provincial championships became far less obvious to their political sponsors. This was presumably influenced by public opinion, which although justifiably aggrieved included some ill-informed conflation of the club and county games.

The latter involve just a fraction of the numbers involved in club activities and are better resourced from medical and safety perspectives. Although the charge was frequently laid against teams in the Allianz Football League that they were “criss-crossing the country,” players travelled separately, stayed in hotels where necessary, played matches and went home.

There has been plenty of misinformation about the risks involved in the actual playing of the fixtures. Had the science concerning on-field transmission not evolved during the summer, there would have been no matches, club or county, played this year.

Essentially, sporting contact outdoors is a) nearly 20 times less likely to lead to transmission and b) unless maintained for 15 minutes within two metres of an infected player, an already negligible risk.

This was re-stated on a Gaelic Players Association podcast last summer by Professor Mary Horgan, an expert on infectious diseases who is President of the Royal College of Physicians Ireland and former Dean of UCC Medical School.

She is also a member of the GAA’s Covid Advisory Group.

Croke Park established a rapid-response testing service for counties, which, for instance, took swabs in Wexford last week at eight o’clock in the evening and had results back before noon the following day.

Initially the GAA was of the view that it would be impossible to proceed at Level 5 but the inclusion of elite sport in general as well as other exceptions means that current restrictions are not Level 5 as originally envisaged.

The association had also made no secret from the outset that they would obey whatever orders and guidelines were handed down by health authorities and if those included a cessation of play, so be it.

After what felt like days of broadcasters badgering politicians frequently not about the overall exemption for sport but specifically about whether the GAA championship should go ahead, Bryan Dobson asked the Chief Medical Officer, Dr Tony Holohan about the broader issue - although he did add, “such as the GAA championship”.

It was worth mentioning the other sports because they have hardly come up in the national conversation. Even the Tánaiste’s reference to ‘bubbling’ was misleading. International sides may occupy hotels for a couple of weeks, as the rugby team is currently doing but rugby’s provincial players and League of Ireland teams aren’t ‘bubbling’.

If there had been reticence on the part of politicians, Dr Holohan was direct.

“We gave specific consideration to that and that’s part of the guidance we provided from the Nphet point of view. We have listened and we have looked at some of the things that happened in the first part of the experience in this country with the pandemic.

“The significant challenge in terms of mental health and isolation for individuals and we thought that for some of these kinds of activities could go a long way to giving people something to look forward to. Some of those activities, which involve in relative terms small numbers of people - they are well planned and well organised and controlled.

“The sporting organisations have done a terrific job in organising some of those activities for elite sportspersons in full compliance with sensible, international guidance. Those are the reasons that we think it’s important to try to preserve some of that kind of activity - to give us all something to look forward to.”

Let’s calm down and see how we get on.