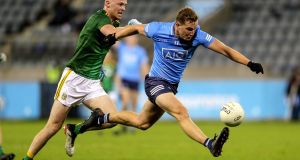 At the resumption of a season that may never end, Dublin and Meath served up a reassuringly old-style contest with Dessie Farrell’s team doing enough to win and take their league challenge to the last weekend.

For teams playing their first intercounty football in so long, they were predictably loose and at times sloppy but Meath in particular will take encouragement from how they got to the pace of the game after a difficult start and pressed Dublin for the rest of the match, keeping in touch until the very end.

It was a pleasant if surreal evening before the empty spaces of Parnell Park. Meath were back in league competition with their neighbours for the first time in 12 years. It will prove a fleeting re-acquaintance as Andy McEntee’s team had already been relegated in the initial stages of the league and although they responded well to the challenge, there was never any real prospect of bridging the 26-year gap that separated them from the previous league win over the hosts.

Farrell fielded a mixed but not too experimental side with 10 starters from last year’s All-Ireland winning side and in the end it was the experience up front that won the game for them – and would surely have won it by more if the ball had reached them a bit more often.

Dean Rock top-scored with a decent 1-8, 1-3 from play, in the process becoming Dublin’s all-time record marksman, passing Jimmy Keaveney’s total of 30-492, whereas Con O’Callaghan and Ciarán Kilkenny weighed in with 0-4 from play each.

That the forwards didn’t get a better supply was partly due to the home side’s lack of precision but that in turn was aggravated by Meath’s doggedness in defence, which turned over the Dublin attack more times than Farrell will be prepared to tolerate in the entire Leinster championship.

He gave a debut to Cian Murphy, the Thomas Davis corner back, and starts for Emmet Ó Conghaile and Eric Lowndes, as well as county finalists Paddy Small and Robbie McDaid.

It was Dublin’s first competitive outing at the venue in 10 years. The usual situation that has the All-Ireland champions playing in the familiar environs of Croke Park was flipped, as the home players have been spending plenty of time in Donnycarney during the recent county championship.

Maybe it all started too well for them. Initially, Meath struggled to keep up with the All-Ireland champions. Stephen Cluxton, starting for his 20th season, and becoming Dublin’s longest serving player, pinged kick-outs into the shadows on the wings and picked out players with ease.

A bit at sixes and sevens, Meath turned over a restart to gift Rock a goal and by the 10th minute, the opening encouragement of taking the lead through the impressive Shane Walsh had been rubbed out by a slick run of point scoring from O’Callaghan, Rock and Kilkenny.

It was summed up by the fourth point. Robbie McDaid was on the end of Cluxton’s kickout, made ground and set up Rock to set the scoreboard at 1-4 to 0-1 and it looked like it could be one of those evenings.

Dublin, however, got careless and became less clinical whereas Meath got to the pace of the game. Cillian O’Sullivan and Donal Keogan showed up the home defence with intelligent, elusive running and the marksmanship of the young corner forwards Shane Walsh and Thomas O’Reilly helped to bring them into the game.

Walsh proved a handful until he tired in the second half, shooting four from play and, had he converted a goal chance in the 47th minute when in behind the defence, Meath would have taken the lead but Cluxton – who had already saved smartly from Cathal Hickey just before half-time - came out to force him wide.

O’Reilly’s contribution came from frees but an unbroken sequence of four closed the gap dramatically before half-time, leaving Dublin’s lead at just a score, 1-10 to 0-10.

Meath maintained the effort in the third quarter. Ronan Jones came into the match strongly at centrefield and Cluxton’s kickouts started to look a bit rusty.

Dublin couldn’t shake off the challenge and start to build a big lead but they managed to stay in front. It might have been harder for them in the third quarter had John Small picked up a second yellow for a late tackle but he escaped.

It was an enjoyable, high-scoring match right until the end with the margin hopping between three and four points. There was concern for Dublin in Jonny Cooper having to retire injured in the 46th minute. Initially the reaction was hopeful but the player will be assessed in the coming days.