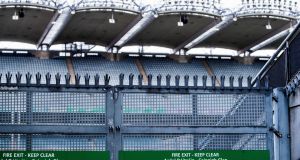 Level 5 Covid-19 restrictions would bring a halt to the intercounty season, which resumes on Saturday. Photograph: Ryan Byrne/Inpho

Just as it makes its long-awaited re-appearance, the GAA’s intercounty season continues to look in the balance.

Despite the painstaking preparations and detailed protocols, the problem for Croke Park is twofold: if even the current levels of public disquiet with the resumption persists, there may be pressure on Government to discontinue support for it and if the public health environment continues to deteriorate at the recent rate, there may be no alternative to a Level 5 lockdown.

It was noticeable on Thursday evening that both Tánaiste Leo Varadkar and Minister for Public Expenditure and Reform Michael McGrath emphasised that at Level 5 there would be no exemption for intercounty activity.

The idea of that exemption had gained ground after a Mail on Sunday report that the controversial recommendation of the National Public Health Emergency Team to go to Level 5 two weekends ago had allowed ‘elite sports’ to continue.

Of course the recommendation was rejected but the assumption persisted that the exemption would apply if the strictest level was to be applied. As well as the ministers correcting that misapprehension, the GAA’s head of games administration Feargal McGill made the point that Croke Park had never believed anything else.

“That was never my understanding,” he said of the notional exemption. “Nobody ever contacted us informally or made a statement about it. The only place we saw it was in the papers. Common sense would have told us that at Level 5 that it would be amazing if we were an exception in those circumstances.

“The GAA’s position on this has always been very clear since back in March. We follow public health guidance at all times and we continue to do that. When that gave the go-ahead for intercounty, we were happy to go along with it. If that changes, we follow the advice. You can’t half-follow it.

“The only exception to that was when we pulled club activity ourselves. Apart from that, you’re either fully following public health advice or you’re not.”

Certainly in recent media conferences, McGill had regularly cited Level 5 as the point at which everything would come to a halt.

The problem for the GAA is that with each passing day - and a number of counties are now already on Level 4 - the prospect of getting to Level 5 looms larger and larger and has been frequently discussed, the tightly packed intercounty schedule has no tolerance for postponements or delay.

Even the suggested concept of a ‘circuit break’ Level 5 lockdown for a couple of weeks would derail the provincial and All-Ireland championships, which were scheduled in more optimistic times.

On the day the proposed, re-drawn intercounty season was unveiled, Friday June 26th, there were 11 new cases of coronavirus reported in the state. Thursday’s daily rate was 1,205.

Crucially, public sentiment has also changed. The GAA of the early pandemic and summer was widely acknowledged to have been of great benefit to its many communities around the country with its social initiatives and involvement. Then ether was the roll-out of well organised and responsible protocols to get club activities off the ground.

From the Croke Park perspective, the organising of the intercounty season - and remember there are just 18 matches listed for this weekend - is so much easier and better resourced than the club equivalent.

Recent weeks however have projected a different image of the GAA, as the same communities have become unhappy and even angry at the reckless socialising, not helped by the re-opening of the pubs, that has accompanied county championship success and driven infection rates around the country.

The association did act on that, calling a halt to all club and county championship fixtures, because it - maybe belatedly - identified that it wasn’t the matches that were the problem but the title victories and associated misbehaviour.

Now, with the resumption of the league requiring teams to criss-cross the country and in some cases travel to Ulster where Covid is rampant even by standards elsewhere, there is a sense that although club and county activities aren’t comparable the public has lost patience with the GAA.

County teams are different in that they don’t have often small, parochial geographical bases but the GAA equally understand that intercounty fixtures could create their own issues.

There may be only a few prizes on offer but counties are well practised in taking encouragement from smaller-scale victories - an unexpected win over neighbours or an historic provincial title to say nothing of an All-Ireland breakthrough, which these days means a football title for anyone except Dublin.

The pubs are effectively closed and winter wouldn’t be a great time for a big screen in the car park but one obvious characteristic of matches - and the reason there was so much original enthusiasm for the return of Gaelic games - is bringing people together, which is the very thing coronavirus thrives on.

Will people continue to congregate wherever they can to watch matches and celebrate or commiserate? If so will the intercounty schedules become as much a root cause of problems as ultimately, county finals did?

It’s something that is on the minds of Croke Park administrators, as McGill bluntly states.

“We’re not afraid to do the same with the intercounty if the evidence is that it’s causing difficulties. As I’ve said before it’s just a game of football or hurling.”

1 Seán O’Brien: Anger over my parents’ break-up never left me
2 Plenty of positives for Farrell as Ireland hit the ground running
3 Ireland braced for a daunting assignment in Paris
4 Will Connors chops his way to the front of Ireland’s openside queue
5 Madness or defiance? The GAA is taking a huge gamble in staging Championships
Real news has value SUBSCRIBE