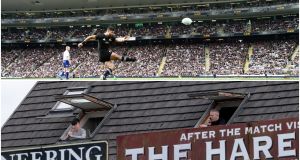 If there is to be a season, then at least the GAA won’t have to worry about attendance being down this year. The season resumed over the weekend in a mood of deep uncertainty. The grounds were empty and eerie and the voices of the players travelled from the pitch and into the living rooms where the supporters watched on television. There’s nothing like being there. The old advertising has never sounded more wistful. If Ireland needed reminding of the old order, the scenes from the Bledisloe Cup in faraway Auckland, where Covid restrictions were recently lifted and where 46,000 rugby fans got together to enjoy New Zealand and Australia, were a tantalising glimpse of sport in Ireland’s not too distant past. But we don’t know when the crowds will be back.

As it is, hurling and football teams across the country headed for home in the dark as to whether they will, after all, be featuring in the 2020 All-Ireland championship or even if they will be getting together for training on Tuesday night. The fate of the GAA season is hardly pre-eminent in the priorities of today’s government meeting before the announcement of new national restrictions. But there is an underlying sense that it would add some element of colour and excitement to what promises to be the greyest and grimmest winter season in living memory.

The West’s version of the Old Firm derby took place in Tuam on Sunday. Mayoites glued to their television across the county must have been licking their lips at the thought of what Mayo might do in this, the year of the silent All-Ireland. And if Padraic Joyce was hoping to dampen the excitement around Galway, then the 3-23 to 0-17 lesson delivered by Mayo, sharp and primed from the get go, succeeded in doing that.

“Probably the most embarrassing day I have been involved with Galway in my career. In my 43 years I have never seen a performance as bad to tell you the truth.”

When asked if he thought the championship might be called off, he blackly noted that he was hoping it would be at half time, by which time his team had coughed up an alarming 2-17. Mayo were scoring for fun just before the break. But Joyce has been firm in his belief that the championship should and will go ahead, stressing its importance for the national morale. But while James Horan was delighted by what he witnessed from his team, he was ambivalent about whether he would get to see his charges make another assault on the on-going Dublin residency of the Sam Maguire.

“I don’t know. I was confident up to a few days ago. The players are providing a lot of entertainment out there but we have got to think of the players as well, their families and loved ones. Whatever the advice is we will go with it. Yeah, it is so hard to know. I don’t know if GAA teams live in bubbles. They all go home to family and to work tomorrow. It is a bit different. There is that to factor in. But there are a lot of controls in place to do everything humanly possible so hopefully that will be enough but I don’t know.”

The wishes of the playing collective was reflected in a survey published by the Gaelic Players Association on Friday night. The results suggested that 25 per cent, a significant minority, would prefer if the All-Ireland championship was cancelled. John Heslin, the Westmeath player who had articulated his personal concerns about returning to play, lined out for his county and was majestic, firing 0-8 in a handsome win over Laois. The timing of the GPA survey, on the eve of the resumption of the season raised eyebrows. After watching his team play in the Monaghan stronghold of Inniskeen, where dances in Billy Brennan’s and all barns have been banned indefinitely, Kerry manager Peter Keane said that the survey did not reflect the mood in his dressing room.

“Not in the Kerry camp and that is the only camp I can think about,” he said. David Clifford fired 0-6 of Kerry’s 0-17 proving that not quite all has been changed by the pandemic. Monaghan manager Séamus McEnaney also emphasised the societal importance of proceeding with the championship through the emergency and stressed his belief that it could be done safely.

“We are in a very safe environment. We have a very strong medical team and the protocols are very strict in our group. If every county team runs that way, we will get through this.”

The result of that Saturday game leaves Kerry top of the Division One table ahead of next week’s visit of Donegal. As things stand, Galway have to prepare for the visit of All-Ireland champions Dublin to Salthill next weekend after this coruscating loss. The presence of former Donegal manager Jim McGuinness in the Galway camp attracted widespread attention when it emerged last week. Joyce smiled when asked what the reaction among his players had been to that guest session.

“We got it there today,” he deadpanned.

“Jim will probably have the phone knocked off now if I try and contact him after that.” But if there is a season to play for, then he’ll probably give the number a go anyway.

“If he is available, we will take him. We’ll have a word with the Pope as well if he will come over to us.”