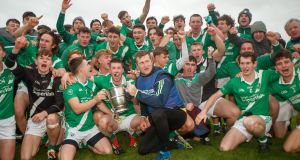 The celebrations were already a little muted and now maiden Galway football champions Moycullen have been forced to pull all their players from the county senior and under-20 panels with immediate effect due to a rising number of positive cases of Covid-19 in the community, including players from within the club.

In line with HSE guidelines regarding isolation, it means all club footballers who are part of the Galway under-20 and senior panels will be unavailable to managers Donal Ó Fatharta and Pádraic Joyce Joyce for this weekend’s games against Kerry in the All-Ireland under-20 football semi-final and the resumption of the Allianz National Football league.

A statement from the club also confirmed the cancellation of all GAA activities in the meantime “to allow for all the necessary actions to take place regarding the contact tracing process”. It had already cancelled all homecoming celebrations after that first county title win last Sunday week.

Experienced Galway defender Gareth Bradshaw is among those to be impacted by the move, while Moycullen centre forward Paul Kelly was also recently called into Joyce’s senior panel along with John Maher (Salthill/Knocknacarra) and James Foley (Mountbellew/Moylough).

As well as Bradshaw, Moycullen captain Dessie Conneely and the versatile Seán Kelly were among those in line for action this weekend. Paul Kelly is also a key member of the under-20 squad along with James McLaughlin and Daniel Cox, a major loss for that semi-final showdown against Kerry.

Galway are set to face Kerry in the All-Ireland under-20 football semi-final on Saturday in the Gaelic Grounds in Limerick at 4pm, while the Galway senior footballers resume their Allianz National League campaign on Sunday when they host Mayo in Tuam Stadium at 2pm.

Moycullen were crowned Galway senior football club champions for the first time earlier this month thanks to Dessie Conneely’s personal haul of 1-9 and Conor Bohan’s crucial 45th-minute goal, as they finished 2-12 to 1-11 winners over Mountbellew/Moylough.

With champions Corofin dethroned by Mountbellew/Moylough in the semi-final, Val Daly’s side was expected to claim a first win since 1986, but instead a powerful second-half display from Don Connellan’s outfit saw them kick on to victory in just their second final appearance. And there was to be no denying the Gaeltacht side, who took a huge step towards victory when Bohan crashed the ball to the net, 15 minutes from time.

It’s a reminder too for Joyce and all fellow county managers how uncertain the situation continues to be around Covid-19. At a scheduled press conference at the Galway training centre at Loughgeorge ahead of Sunday’s game against Mayo, he spoke about doing all he could do for the players – including bringing in Donegal’s former All-Ireland winning manager Jim McGuinness for a session over the weekend.

“I’m always looking to do what I can for the players,” he said. “My job as Galway manager is to make sure that my players are the best prepared that I possibly can give them. I just felt at this time that we needed some bit of a surge or something.

“The mental aspect in the game is huge nowadays. In my eyes he’s the best performance coach that’s in the country. He’s been there, he’s done it and he’s very relevant to GAA as you know. He’s won it as a manager himself. I just thought it was a perfect fit, it was a no-brainer for me. It didn’t just fall out of the sky, you know.

“There are a lot of aspects to it. Jim brought a different element and the lads enjoyed the session as I did. We’ll have to wait for the feedback, the session only took place yesterday at 2pm, it was over at 4pm. We need to do an analysis of the session and get feedback from the players and see what way it’s working.”