O’Neill steps into the unknown as Galway eye silverware

Everything is different as hurling championship starts, even press conferences 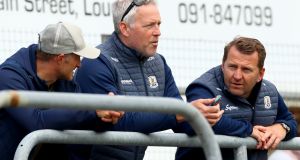 “It feels like a different year altogether,” Shane O’Neill, the Galway manager says as he sits in a big empty marquee not a million miles from Galway racecourse. Too right. It feels like a different world. It’s a stormy Tuesday in Galway and O’Neill can reflect on the unexpected pleasure of witnessing the famously intense and competitive Galway club championship up close and personal. It wasn’t what he expected when he took over the post but the Limerick man got a local’s guide to the maroon game.

“We saw an awful lot of players across the 24 senior teams and also some of the intermediate matches as well. We distributed those amongst the management so we saw a lot of players. From the panel point of view we have had different guys coming in and out so it is fluent to an extent. Guys who came in are in very good nick. We are back since September 14th. Some players. Not all. The county final finished a couple of weeks ago but they are generally in very good nick and the hurling has been sharp.”

On Halloween weekend, Galway will play Wexford in the Leinster Championship in Croke Park which will be ghostly and all of that. Like every manager, he is preparing for a unique championship with a blindfold on. The original lockdown – the happy lockdown – was called just before Galway’s league clash against Wexford. After the long break and the intensity of the championship comes the unexpected winter championship. Monday evening’s confirmation that the GAA season could go ahead felt like a small gift.

“Really looking forward to it. Good news last night that the championship is on. We have been working hard for the past couple of weeks with a view that it would be played. We are coming in cold to a large extent. All we can do is focus on ourselves. We are looking at our own performance in the league. We have seen who is in club form. It is really about seeing how we are going and hopeful it will come to fruition.”

With the best will in the world, there isn’t all that much to talk about. The distancing arrangements from the Galway hurling board are excellent but big gusts of October wind cause the marquee to flap wildly and so, at times, O’Neill can’t hear the questions and GAA generalities are yelled across the room. Because, as he says, the league feels like another year, there are no co-ordinates. The 2020 championship is the blankest page imaginable. O’Neill spent the weekend watching the football league games just to get a sense of what operating under the new dispensation will be like.

“I suppose I was just trying to see what protocols are in place. Obviously we have been given the regulations but it is nice to see it on the TV to see how it was working out and what was happening on the line and what happens in the water break, various bits and pieces like that.”

The big change is the mandatory water break midway through each half, giving managers the equivalent of a basketball time out.

“The players are obviously very used to it now from the club championship. As a management we’re not. It is something new for us. The players themselves are very used to it so I wouldn’t think it will make much of a difference to them. But from the club championship it seemed to affect momentum in different ways so it will be interesting to see how it goes.”

Daithí Burke, the dual player who featured in the recent county final with Turloughmor, is the only casualty to come out of the club championship. The hugely influential defender hobbled off in the first half of his club’s narrow county final defeat. O’Neill has no timeline on his return as he is still in rehab.