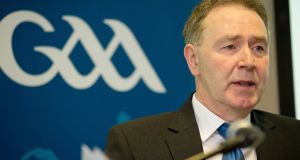 Consultant surgeon Kevin Moran, who is on the GAA’s Covid-19 Advisory Committee and is also the Donegal team doctor. Photograph: Morgan Treacy/Inpho

This is a complicated time to be a team doctor in any sport. The bubble around any group of individuals is understandably flimsy, as evidenced by the Irish soccer team’s travails over the past week. You can take all the precautions you wish, but reality dictates that the virus loves a congregation. Team sport is a small miracle in that context.

Dr Kevin Moran faces the virus on three fronts: first in his day job, then through his role on the GAA’s Covid-19 Advisory Committee, and finally as the team doctor to the Donegal football team. For him, the benefits of team sport far outweigh the pitfalls. The mental health upside alone makes team sport a silver bullet and so we must find all ways possible to make it happen.

In Donegal, they were no sooner back training for the inter-county season than they had to shut down operations for a fortnight. As Moran lays out the particulars of what happened, so the challenges of keeping tabs on the virus in a team setting are made crystal clear. You can do a lot to create a bubble but it won’t take much to pierce it.

“After the schools went back, we had what happens every year in society at large,” Moran says. “We had a lot of fellas coming to me with small upper respiratory problems. Sore throats, bit of a cough, a few colds here and there. It was nine or 10 lads in total. So I triaged them case by case and checked in with them daily.

“One morning, one of them rang me and said his sense of smell wasn’t what it should be. So immediately, we tested him and he came back positive. And straight away, the realisation went through the group that this was serious. The upshot was a lot of anxiety, not really among the players but among their families. A lot of players had vulnerable members at home, people undergoing cancer treatments, elderly relatives and so on.

“So I spoke to a number of people in public health and their advice was to test everybody. We were confident enough that the number of close contacts was minimal but given that we had up to 10 fellas reporting some sort of symptom, we said let’s test everybody. We stood the panel down for two weeks as well.

“Two things were interesting. The other eight or nine lads who had symptoms, not one of them tested positive. They were all fine, all came back negative. But we got three other positive tests in people who had no symptoms whatsoever. None then and none since. Never felt as well in their lives and it turned out that the three of them were positive.”

That was in the middle of September. Upon their return to collective training, the Donegal set-up kicked protocols up a notch. Before, players had mostly done as they were told when it came to being careful, but there was an element of having to do your homework about it. Not when they came back.

“We learned so much from it as a group,” says Moran. “It was after that that we became completely rigid with the dressing-room set-up and there was complete buy-in from all players and staff, absolutely. The protocols are in place and everyone is sticking to them.

“We are lucky in that our centre of excellence has four dressing rooms. There is a group of players who live locally so they come togged out and they go home and shower at home afterwards. The remainder are split into four, one group to each dressing room.

“The same fellas are in the same dressing rooms every night. It’s quite rigid – you get 15 minutes to go in and have your shower and get out again. Everybody has a 15-minute limit and if you can do it quicker, so much the better. You go in in your mask, you take your mask off for the shower and then you put it on again before you come out.

“There’s a collective sense of responsibility, driven by individual responsibility. Nobody is going to do anything to let the team down and that alone requires a sense of dedication, above and beyond anything they’re doing on the football front. Every single one of them bought into it, especially after we had to shut down.”