Theatre in 2018: Looking back in anger and learning lessons 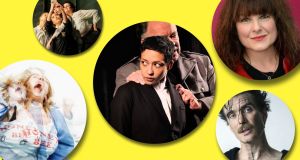 Centre stage: The Lost O’Casey, Asking for It, Ruth Negga in Hamlet, Tara Flynn, and Cillian Murphy in Grief is the Thing with Feathers

When the first major shows of the year were a handsomely realised revival of Sive, John B Keane’s rural tragedy of desire and materialism, which packed them in at the Gaiety, and a reluctant staging of John Osborne’s portrait of misogyny (self-portrait, some argue) Look Back in Anger warding them off at the Gate, at least one major theme seemed to be on everybody’s mind.

It is now three years since Waking the Feminists stirred new conversations about long-standing inequities in our culture, asking the theatre to take a hard look at its practices, its prejudices and unchecked biases, affecting everything from pay disparity and acting and writing opportunities to broader social representation. Laudably, it also inspired new commitments to change.

With the added impetus of Me Too came a belated focus on workplace harassment in the theatre. When a damning report into the behaviour of the Gate’s former artistic director Michael Colgan was finally published in February, it prompted an unreserved apology from the theatre’s board and a statement that Colgan had “a case to answer” about “dignity-at-work issues, abuse of power and inappropriate behaviours”.

What case this may involve has yet to be seen. But on stage, the theatre seemed hungry for its own answers. Under new artistic director Selina Cartmell, the Gate was attentive to the grievances of the past but understandably intent to turn a corner and, in that alone, to never look back.

The Abbey, in its second year of new management, started its year with Porcelain, a new play by Margaret Perry given an undecided production. Inspired by the burning to death of Bridget Cleary on suspicion of witchcraft, at the hands of her husband, it revealed itself as a study in depression and fragility, the past echoing in the present. More vigorous was The Unmanageable Sisters, Deirdre Kinahan’s adaptation of a Michel Tremblay classic, which imagined his working-class Montreal women as a shifting chorus of co-workers and relatives in 1970s Ballymun, given an impressive ensemble by director Graham McLaren, in a production more in love with kitsch design and pat politics.

Both plays touched on reproductive rights, but the most salient expression belonged to Tara Flynn’s excellent Not a Funny Word, a co-production by the Abbey and Thisispopbaby. Before the referendum to repeal the Eighth Amendment, Flynn’s combination of frank confession and consoling comedy, presented at Where We Live festival, felt magnificently and shockingly daring. After the referendum, when the country discovered the full breadth of its compassion, it felt like a salve.

It was not, however, a year to be soothed. Caitríona McLaughlin’s striking and pummelling revival of Marina Carr’s On Raftery’s Hill, a study in rancid and incestuous abuse, was an urgent investigation of a lyrically disturbing play, which could only be faulted for the brevity of its run. Asking for It, Meadhbh McHugh and Anabelle Comyn’s imagistic and claustrophobic adaptation of Louise O’Neill’s novel about the rape and vilification of a young girl, came with a distressing sense of timeliness in the wake of the Belfast rape trial.

When Kinahan’s next play for Fishamble and the Abbey, Rathmines Road, opened some months later, featuring a rape survivor’s confrontation with her attacker from long ago, it came immediately after Brett Kavanaugh’s similarly distressing US Supreme Court confirmation hearings.

Even a piece of bright nostalgia, such as the Gate’s production of The Snapper, touched on issues of dubious consent. If stories about rape and the maddeningly elusive search for justice ever seem less timely, we’ll know we have arrived at a better day.

It says something about the prevailing mood of the times that even the more crowd-pleasing offerings this year had darker fixations. Enda Walsh’s absorbing adaptation of Max Porter’s formally adventurous and heart-breaking novella Grief is the Thing with Feathers gave Cillian Murphy the makings of a bravura performance, within a production that both howled with despair, erupted with playfulness and packed some affectingly sly surprises.

The Gate’s twisted fairground production of Stephen Sondheim’s Assassins scratched the underbelly of Americana as its properties seemed radically devalued in the Trump era.

While it later achieved the coup of casting Ruth Negga as a brittle, boyish Hamlet, facing impossible odds to restore justice to a vastly corrupt court, it was Druid’s Richard III that seemed to better expose the mechanisms behind tyranny. Director Garry Hynes achieved this not just by giving Aaron Monaghan room to achieve a charismatic, shimmering villainy, but by working with a wonderfully decadent and unsettling design from Francis O’Connor that showed how tyrants seem to distort reality itself while the world watches on, transfixed. We just can’t get enough.

When even comedies and musicals skewed bleak, from Fiontan Larney’s impressive Fringe debut Beat anatomising toxic masculinity through supple hip-hop verses to Pat Kinevane’s latest solo show, Before, treating a misfit character to the lushly imagined canvas (and admirable dancing) of a classic musical but the despair of multiple dispossessions, you could be forgiven for thinking there was no room for positivity.

Let there be light

But that wasn’t quite right. Sonya Kelly delivered gloriously funny depictions of relationships at crisis points in Druid’s Furniture at Galway International Arts Festival; new company The Local Group made artful work about tradition and migration in Foyle Punt; and a strong Dublin Fringe Festival showed burning talent in new works The Cat’s Mother, by Erica Murray, the divinely funny Dreamgun Film Reads and the arch and autobiographical assertions of Pom Boyd’s Shame.

That last play, due for revival in 2019, had some congruences with Gina Moxley’s The Patient Gloria, a vituperative satire of male privilege whose blunderbuss sarcasm yielded mixed results. That, however, seemed like the genuine expression for an enraging and enraged time.

Still, Anu Productions’ peerless promenade show The Lost O’Casey, featured at this year’s Dublin Theatre Festival, seemed more instructive, taking the characters of a long-forgotten Seán O’Casey play and sending them skittering through modern Dublin, a city again riven with poverty, inequality and homelessness. O’Casey’s protagonist, Nannie, failed by the State, promised to leave “a Nannie-shaped hole in the Liffey”, and Sarah Morris’s extraordinary and intimate performance pleaded for the simple dignity of being observed and remembered. Maybe one day we’ll learn a lesson that lasts. But for the moment, there was every reason to be angry.