‘Asking For It’ stage review: An unsettling anatomy of rape culture 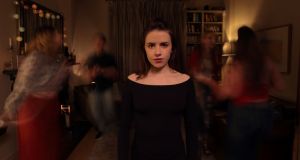 Lauren Coe is excellent as Emma in ‘Asking for It’. Photograph: Hugh O’Conor

Asking for It ★★★★
Everyman Theatre, Cork

Emma O’Donovan, a fifth-year schoolgirl with brittle self-esteem, has become accustomed to seeing herself through a cascade of images. She is a model of beauty picked over by a neurotic mother; the “queen bee” of her Cork school, admired by an audience of lusty boys and resentful girlfriends; a social media darling who is even a billboard model, a dream to be possessed.

At a pivotal moment in Louise O’Neill’s sensational 2015 novel, Asking For It, however, Emma looks at a stream of degrading, dehumanising images, widely shared online, and does not recognise herself. “She is an It,” Emma says of the figure, the victim of a gang rape. “She is a thing.”

Here, Emma sinks, or drowns, weighed down by isolation, family dysfunction and social pressure – and, so sadly, do we

In Landmark Productions and The Everyman’s gruelling adaptation, written by Meadhbh McHugh in collaboration with Annabelle Comyn, Emma is again startlingly objectified. Played by the excellent Lauren Coe as a girl with no fixed sense of self, she is split between competing perspectives, shamed and blamed by a small twitching community, argued over in the media, humiliated and abused online. That fracture informs Comyn’s striking production, an unsettling anatomy of rape culture, divided uneasily between the flaring energy of youth and the suffocations of a hypocritical society.

“I look at my reflection in the vanity mirror,” Coe begins, alone onstage, ruing her looks – “Would that night have never happened?” – before a video image of her face fills the elegant window-panes of Paul O’Mahony’s monolithic set. That structure, a glass house, will shift in both shape and meaning throughout the production. Sinéad McKenna’s lights allow translucent glimpses of writhing bodies at a house party, for instance, where the school GAA heroes prowl, mingled with Jack Phelan’s ghostly video images of girls in states of abandon or distress. Like Sue Mythen’s choreography, which gives the excellent cast one staggering dance sequence – fizzing with performed sexual confidence and aggression – it’s an accomplished, poetic merging of technology and stagecraft. To be young in this hyper-sexualised, hyper-scrutinised age, it knows, is to live between transparent fragility and startling projections.

The details of Emma’s attack are erased by a fug of alcohol and drugs, but whether she recognises it or not, everyone is a victim in this pervasive atmosphere. She refuses the word “rape” when speaking with her friend Zoe (a fine Venetia Bowe), herself distressed by an act of non-consensual sex, and is pitiably self-deluded during her own: moaning, she reasons, “will make it end quicker”. The production is sensitive to her later violations, graphically described, conveyed by a flicker of grainy, splintered images.

For the play’s second half, confined to the O’Donoghue’s suffocating home, the set folds in on itself, given kitchen-sink realism and streaked with rain. Here, Emma sinks, or drowns, weighed down by isolation, family dysfunction and social pressure – and, so sadly, do we.

That Emma is losing her voice is clear, undermined by Ali White’s toxic Mam, barely acknowledged by Frank McCusker’s ashamed Dad, supported only by Paul Mescal’s sympathetic brother, Bryan. But where various characters once delivered inner monologues onstage, now Emma’s thoughts are confined mostly to recorded voice-over, an impersonal device, while Comyn positions her in powerless spaces; her back to the audience, for instance, or stranded upstage; a girl being erased.

Inspired by one gruesome US rape trial and staged in the wake of another much closer to home, the sense here is not only that will justice be elusive, but, just as disturbing, that recovery is impossible.

“I belong to those other boys, as surely as if they have stamped me with a cattle brand,” says Emma, alone in her underwear, as comprehensively ruined as the subject of a Victorian “fallen woman” novel. But that, too, is a facet of rape culture: the idea that victimhood is forever, that survivors must be “damaged goods”. The show is unsettling and alarming for good reason. But nor is it immune to harmful images.