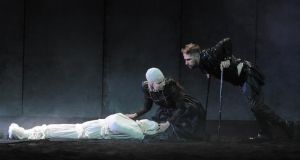 Town Hall Theatre, Galway
★ ★ ★ ★
Think of Richard III – a twisted king, in every sense of the word – and you imagine a monster. The “abortive, rooting hog” swindled by disfigurement; the “poisonous bunch-back’d toad” who gleefully usurps the throne through chicanery and murder. It is less comfortable to consider how attractive he is. In DruidShakespeare: Richard III, however, that becomes very hard to ignore.

“I am determined to prove a villain,” Aaron Monaghan’s fascinating figure announces, propped up on two spindly canes, trilling the word while the audience snicker. Dressed in a conspiracy of leather and fatigues, with sleeves that shimmer, he looks part soldier, part rock star. To put the matter at its most stirring and subversive, this Richard is hot.

Seduction has always been an important part of Shakespeare’s play, integral to Richard’s ascent, but Garry Hynes, the director, makes it more pointed and meaningful in Druid’s striking production. Francis O’Connor’s extraordinary design trails a surreal kind of decadence over more brutal horrors, taking its cue, perhaps, from one character’s dream of corpses studded with gems.

At a time when global politics slides deeper into gaslighting and cynicism, leaving people giddy or numb, you reel from what the play reveals

Here, on a set as earthy and industrial as an abattoir, Marie Mullen’s Queen Margaret wails her warning prophecies like a phantom, Jane Brennan’s dazzling Queen Elizabeth seems coated head to foot in molten gold, and Siobhán Cullen’s shallow, grieving Lady Anne emerges hauling the body of King Henry on the impossibly long train of her dress. You fall into the show as if into the folds of a dark dream.

Monaghan plays his unlikely seduction of Lady Anne as a slinky kind of manipulation – in a gorgeous display of feigned vulnerability, he catches the dagger by the blade when it falls from her hand – and Hynes emphasises not so much his blunt coercion as her dazed acquiescence. It takes a debauched, distracted society to succumb to so rapacious, transparent a tyrant.

That makes this production both intoxicating and disturbing, like a horror show seen through a haze of laughing gas. At a time when global politics slides deeper into gaslighting and cynicism, leaving people giddy or numb, you reel from what the play reveals. Richard wouldn’t rise without help: from Rory Nolan’s mendacious Buckingham, Marty Rea’s profoundly unsettling Catesby (a dispassionate executioner who, with his Nordie accent, bowler hat and bolt gun, knows where the bodies are buried) and, in one especially arch, gaudy performance, a gulled public merrily portrayed by the audience.

Richard, it is worth noting, was once spooked by the clear-eyed prophecy of “a bard of Ireland”. That actually sounds like a rough translation of DruidShakespeare. The remarkable thing about the Irish voices here is how clear they make the play sound, in both comedy and grim hypocrisy: “You are deceived,” Seán McGinley’s guileless murderer tells Clarence. “Your brother Richard hates yeh.”

If the production loses some amperage, despite a very fluid edit, that’s because Richard himself always does, wilting with his gains, his need insatiable. In this version he is even tormented by fewer ghosts on the road to his comeuppance, as though that too is just part of our own expected moral entertainment. You may deplore him, or adore him, but Richard knows what you want.

Runs in Galway until Saturday, September 29th, and then at the Abbey Theatre, Dublin, from October 3rd to 27th as part of Dublin Theatre Festival