Look Back In Anger review: Deconstructing a nasty piece of work 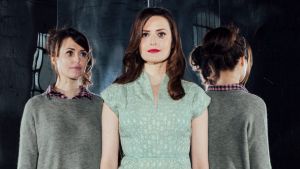 Embittered, misogynistic, abusive and endlessly self-justifying, Jimmy Porter, the protagonist of Look Back In Anger, is a nasty piece of work. Can the same be said about the play?

That seems to be the question behind director Annabelle Comyn’s cautious staging of John Osborne’s controversial 1958 drama for the Gate, introducing various distancing devices and fascinating strategies of resistance, as though framing the patriarchy within parentheticals.

It is a bomb disposal unit’s approach to a problematic text, deconstructing it carefully while trying to avoid injury.

Turning the claustrophobic attic flat of the Porters into a tight sound booth, bordered by microphones and PA equipment, designer Paul O’Mahony creates a battleground of noise, in which both the playwright and characters’ voices can be distinguished.

In a subversive move, Comyn incorporates Osborne’s stage directions, which, read aloud by the cast, can sound as prolix and self-important as Porter’s haranguing monologues.

How the performers either submit to these demands, or later begin to stand up to them, brings a level of drama to the proceedings that is more interesting than the play.

As the endlessly demeaned Alison, the arresting Clare Dunne maintains her composure over the ironing board as she indulges Ian Toner’s ceaseless tirades as Jimmy (who, handsomely severe and shrill, is as good in the part as anyone could hope to be).

As Cliff, the friend and lodger to whom the neurotically sexless Jimmy seems to have delegated all physical intimacy, Lloyd Cooney even walks out on a scene that turns violent, hands raised in protest.

Rather than go blindly along with Jimmy’s grandstanding invective and self-pity, or simply ‘no platform’ him, the production suggests alternatives: we can critique, protest or disengage.

That, rather fascinatingly, makes it feel like a performance under duress, with no compelling reason to stage it. Why look back at all?

The tension is translated into a kind of aural assault; of clanging church bells, what Jimmy calls “the eternal flaming racket of the female”, his own petulant parping jazz trumpet, or – in Tom Lane’s sound design – a fuzz of old telephone static, as though the play was reaching us over a lousy connection.

The irony of Jimmy’s position – decrying others for their hypocrisy and lack of passion while moaning that all the “good, brave causes” have been taken – is that he is now the very model of frustrated male malcontent that decent society is trying to address.

Vanessa Emme’s glamorous Helena, another cipher bafflingly drawn to him, decides that Jimmy’s problem is, “He was born out of his time.”  Perhaps she’s right.

But the angry young man, the production makes abundantly clear, has had his day.