Druid’s unmissable Waiting for Godot embarks on national and international tour, while Antarctic adventurer Ernest Shackleton is back in Blue Raincoat’s intrepid production 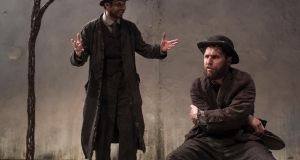 Waiting for Godot again – but this time it’s refreshingly different

“Off we go again,” says Estragon wearily, and later Vladimir. Until recently you knew how they felt. Beckett’s earliest theatrical masterpiece, long the unofficial property of the Gate Theatre, now makes considerably more regular appearances than its famous no-show, and often with no more satisfaction. Nothing to be done. That all changed with Druid’s exceptional production from 2016, revived last year at the Abbey, and now undertaking an expansive national and international tour. Directed with energy and heart by Garry Hynes, designed with artful simplicity by Francis O’Connor, and performed by a revelatory cast of Marty Rea, Aaron Monaghan, Rory Nolan and Garrett Lombard, this is the freshest, funniest, most affecting production of the play you’re ever likely to see.

On a road as parched and cracked as the end of time, Monaghan’s suffering Gogo is as curled as a question mark next to Rea’s Didi, an eternal exclamation point, punctuating their waiting with conflict and compatibility. In the role that won him an Irish Times award, Nolan’s Pozzo is a revelation, a bizarrely indeterminate character desperate to be acknowledged: “Is everybody looking at me?” Don’t laugh (although you will), but that’s the play’s tragedy: does anyone see our suffering, our playing, our existing? Now that they’re back on the road, this Godot is unmissable.

First undertaken in 2015, and now returning for a second visit to Dublin, Blue Raincoat’s Shackleton expedition originally marked the Sligo-based company’s 25th anniversary, a theatre group long engaged with the business of discovery. The story of Ernest Shackleton’s Endurance mission has an obvious appeal for a physical ensemble with adventurous spirit; a fascinatingly blighted adventure with staggering accounts of bravery. But the company’s almost-wordless version, developed with long-time dramaturg Jocelyn Clarke, takes a deliberately cooler approach.

Through sombre, hypnotically controlled movements, four performers manipulate replica models and malleable materials to give a blow-by-blow account of the adventure in miniature. White sheets bundle up like icebergs, silhouettes of huddled men are cast across fragile tents, escape boats careen across the dark expanse of the theatre like bunraku puppets. It is fascinatingly uninterested in the thrills of the survival story, focusing instead on numb persistence. That is where a long-standing theatre ensemble meets an Antarctic expedition halfway: both know that exploration is a full-time job.

For anybody removed from their geography, history and politics, the six counties of Northern Ireland have leant easily to a memorable acronym and mnemonic device: F.A.T.D.A.D. That gives Dublin writer Anthony Goulding the title for a new play about a teacher in the northwest inner city of Dublin, teaching his students about a complicated legacy. Expounding his deeply nationalistic beliefs, he reveals his investment in the cause – surprisingly, for a man who seems to embody that FAT DAD acronym rather literally, he shares his experience of going on hunger strike in sympathy with Bobby Sands, to the cost of his social standing and with the loss of his job and finally his home. “Think Dead Poets Society with Martin McGuinness as the teacher,” one early viewer reported. Directed by Vanessa Fielding, of the Complex, whose ethos is to make accessible, socially engaged work, it brings back a team whose collaborations stretch back more than 20 years, for a project with a similarly deep sense of history.