Production at Carlow Arts Festival puts artists, disabled and non-disabled, on stage together 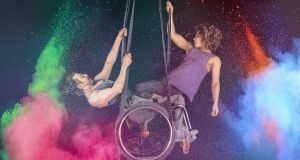 Neither freak show nor side show, disability is now centre stage

The circus arts have a chequered history when it comes to disability. However, the world has come a long way from the 19th-century freak-shows made popular by PT Barnum’s travelling players, where physical difference was regarded as a spectacle in and of itself. The flagship event at this year’s Carlow Arts Festival is a piece of community circus that includes artists who are disabled and non-disabled, and asks just what value we place upon difference and equality in the contemporary world.

What Am I Worth? is spearheaded by the British circus company Extraordinary Bodies, which was formed as a creative partnership between sensational showmakers Cirque Bijou and arts activists Diverse City, with the purpose of increasing integration between artists who are disabled and non-disabled. As founding member Claire Hodgson explains, the company was born in the wake of her involvement with the opening ceremony for the Olympics in London in 2012. Hodgson had been working with a group of young people with intellectual disabilities and physical impairments on a project that involved sharing circus skills. When the opportunity to showcase their talents was presented “they were adamant that they wanted to perform at the Olympic opening ceremony [rather than the Paralympics]. The Paralympics was an incredible cultural moment, because it shifted people’s view of disabled people, but they wanted to be seen at the Olympics and to be seen to be part of it.”

After their short performance, Hodgson committed herself to the idea of artistic inclusivity. “I didn’t want to live in a world where people are segregated based on their abilities,” she says, “and artistic work is a great way to counter that. Placing artists with and without disabilities side-by-side is a way of challenging people’s prejudices, but also of working towards a more integrated world in a practical way.”

Hodgson acknowledges the uneasy relationship between circus and disability, but she says with Extraordinary Bodies “there is no sense that the disabled participants are a ‘sideshow’. They are at the centre of the spectacle, playing main parts: they are working as equals. All performance is to some degree an objectification: people are on a stage, we are looking at them. But disabled people are looked at alot in their day-to-day lives, and it is often not welcome. Being on stage you are making them visible, and there is a different relationship. The power is with the artists – ‘I want you to look at me’ – rather than the viewer – ‘I want to sneak a look at you because you are different’.”

Circus is the perfect art form for this sort of artistic activism, Hodgson says, because “it is all about people doing surprising physical things. Because of attitudes to disability, that arena has been closed to a lot of people, so putting new, different bodies into that space is exciting. Circus is all about taking risks, but in mainstream culture only certain people are allowed to take risks – non-disabled people with conventional bodies – so by bringing different bodies into the circus we are challenging people’s expectations about which bodies are fragile and which are not.”

Traditionally, she says, circus thrives on “a big range of body types. You have strong men and women, and tiny trapeze artists, who have a different physicality to jugglers and so on. Historically and practically, circus needs people with all different sorts of physical types and skills. We are just pushing that a bit further.”

Musician John Kelly is a company member of Extraordinary Bodies. A full-time wheelchair user, he describes his disability as “steps and stairs and attitudes”. Disability isn’t really about ability, he says, “it is about discrimination. It is other people who prevent me having full equality and participation.”

Kelly has been involved with Extraordinary Bodies for the past five years. As a professional musician and music technologist, he has experienced barriers when it comes to the perception of his work: “people seem to think that because you are disabled, your music is about disability, when really you are writing, just the same as anyone else, about all of your experiences: of life, love, politics, the environment, how you are feeling today.” Working in a professional integrated company, Kelly says, allows you access to different audiences and a larger platform, and to challenge expectations. Like Hodgson, he believes circus is a particularly fertile form for this sort of integrated expression. “Circus is about collaboration and support in every aspect. You need to work together to keep safe on stage. It’s only when you have that support that you can take risks: you take those risks together.”

If diversity is at the core of Extraordinary Bodies’ artistic philosophy, it is also at the heart of their new show, What Am I Worth?, which has been developed over the past 12 months in collaboration with local communities in 10 cities across Britain and Ireland, including Carlow. The show asks big philosophical questions about the value we place upon different lives in our contemporary, capitalist society. Workshops began, Hodgson explains, by asking participants a series of questions: “how do you value yourself? Is your value seen in society or not?” The call for volunteer participants was met readily in Carlow. “There was a total diversity in terms of the age and life experience of the people who wanted to be involved,” Hodgson says. “We had teenagers and people in their 60s, some with intellectual disabilities, some with physical impairments, some who had no disability at all. What really struck us was that people wanted to be involved because their stories had been overlooked, their voices aren’t always listened to.”

The themes that came up included immigration, disability, feminism, and everybody agreed that some people are seen as contributing to society, others are seen to contribute nothing, but “these are arbitrary decisions that don’t necessarily reflect personal realities”.

Twenty-year-old Sadbh Feehan was one of the participants in the Carlow workshops. A keen performer and sportswoman, Feehan saw the Extraordinary Bodies project as “a chance to meet new people and make new friends. I liked the fact that it was very inclusive, so anyone of any ability could do it.” Feehan, who has competed in the Special Olympics many times, enjoyed seeing how the different performers executed unexpected feats: “one woman, Dee, had only one arm and she could do amazing cartwheels. I can’t even do proper cartwheels! Another person, David, was completely deaf but the way he moved and danced – even though he couldn’t hear the music – was incredible.”

Feehan was encouraged to contribute her own story to the artistic process and she will perform with a community cast alongside the professional company members when it opens in Carlow. It was the questions posed by the workshops that resonated the most with Feehan, who has learning disabilities: when you have an invisible disability, the world can be an especially unforgiving place. “You had to think about what you think of yourself and what other people think of you. If there is prejudice because you are different.”

Kelly says the show forces the audience to think about traditional narratives of social value too; to “ask themselves the question ‘what am I worth?’ And that is an important thing. It might not seem political, but it is the way we can make change happen. By listening to other people’s stories, by telling our own. That is how we can create a society based on equality and justice and inclusion for all.”

Kelly is also keen to highlight how the performance speaks to ideas of social integration in a practical way as well. “Everyone is welcome to the show,” he concludes, but “it is just as important that everyone can access it”. With that in mind, performances will feature audio description and touch tours for people with vision impairment, as well as live Irish Sign Language interpretation. It is, crucially, also free. Indeed, 75 per cent of the Carlow Arts Festival programme this year has no admission fee, ensuring there will be no economic barriers for potential audiences who might like to be involved.

What Am I Worth? is at the Carlow Arts Festival on the June 9th, carlowartsfestival.com

Some 250 years ago, equestrian trickster Philip Astley drew a circle on a patch of abandoned land near Waterloo in London and invited a variety of showmen and athletes to join him. This was the beginning of the modern circus, and within two years, Astley had his own amphitheatre, offering year-round entertainment. His company of clowns, jugglers, strongmen and acrobats also toured, and the first place they brought their variety spectacle outside London was Ireland, spreading the joy of a theatrical showcase of spectacle. To mark the anniversary of Astley’s landmark performance, Circus 250 is a celebration of Circus across Britain and Ireland. Irish events include Union Black, an international fusion of hip-hop and circus, which runs from June 15th-17th as part of the Cork Midsummer Festival; the Irish Aerial Dance Festival in Letterkenny, which runs from June 24th-July 11th; and the big budget Cirque Berserk, which runs from September 25th-30th at the Bord Gáis Energy Theatre.