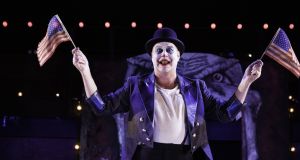 In the United States of America, anyone can grow up to be president. Everyone else, though, can take a shot at him. Most of the time, that’s figurative – or, to use the incumbent’s turn of phrase, a total witchhunt. But every once in a while a bitter grievance or a state of mental disarray conspire with the Second Amendment, and a troubled individual takes aim at history. In Stephen Sondheim and John Weidman’s 1990 musical Assassins, political murder is even imagined as a dark national past time.

“Shoot a Prez, Win a Prize,” proclaims the morbid carnival of the Gate’s new production of Assassins, a ghoulish side show to the American Dream. That Dream, you may remember, was recently pronounced dead by no less a figure than the current US President at his inauguration, giving a bleak timeliness to this revival, and a sardonic humour to chime with the moment.

Director Selina Cartmell has long had a flair for combining the beautiful and the corrosive, and here she picks over the carcass of Americana: the lost innocence of coca-cola bottles and roller-skates, fast food and gun fetishism, the mass desires of a proud nation of individuals. Just look at the special relationship each assassin has with their firearm as Nicholas Pound’s Proprietor – presented as a cross between a scary clown and a moving target – invites them into this purgatorial shooting gallery of American history on Everybody’s Got the Right. To quote another musical, they are not giving away their shot.

The more scabrous side to Assassins is to see these frustrated, fully loaded misfits as a punchline in history, their big moment reduced to a “HIT” or “MISS” on Sarah Bacon’s dilapidated fairground set under the infernal glow of Sinead McKenna’s lights.

Matthew Seadon-Young’s passionate John Wilkes Booth, who gave Abraham Lincoln his worst night in the theatre, is serenaded with cherry-pie cheer by Gerard Kelly’s hayseed Balladeer in Ballad of Booth. There’s a grimmer irony in Sam McGovern’s earnest Czolgosz, worked half to death, making his way “to the head of the line” to shoot William McKinley. And the show’s most twisted, affecting moment may be the moony love duet shared by Rory Corcoran’s gauche John Hinkley and Kate Gilmore’s Lynnette “Squeaky” Fromme, treated with knowing syrup by musical director Cathal Synnott as they sing to respective photographs of Jodie Foster and Charles Manson.

Three knockout performances find the sensitivity in dark comedy. Aoibhéann McCann’s stumblebum Sara Jane Moore hauls her kid along on an attempt to plug Gerald Ford; the brilliant Mark O’Regan’s squinting, inanely smiling Charles Guiteau basks in both celebrity and insanity; and Dan Gordon turns Samuel Byck – the disgruntled, shabby Santa out to get Nixon – into a hilarious portrait of working-stiff resentments and fascinating delusions, squeezed into a bumper car.

And yet the musical itself can’t hold its nerve, too haunted by John F Kennedy’s assassination to see black comedy in it. Even the set seems to sober up as Lee Harvey Oswald comes into view, played by the fine-voiced Kelly, whose impressive brawn makes him a more natural choice to play the Dallas Book Depository.

Now the ensemble sing solemnly of remembering where they were that fateful day, in a way that Lincoln’s peers never do, and you may be struck less by the gravity of the occasion than the self-regard of Baby Boomers. Reagan getting shot in the gut is good for a laugh, it seems, but JFK’s death really shook the world.

That abrupt swing into sentimentality explains the occasional strains in this production, muzzled by insufficient amplification where it needs to blast, with scene transitions yet to fully bed down. Would it prefer a darker irreverence than an otherwise affecting hymn for the disenchanted, Another National Anthem? These killers and would be slayers were deluded, the musical must clarify, but happier delusions keep the nation going: the usherette who becomes a rockstar, the mailman who wins the lottery. The American Dream has to survive the hit.