‘Grief Is the Thing with Feathers’ spreads its wings on stage 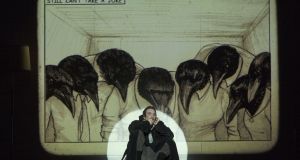 Cillian Murphy in Enda Walsh’s adaptation of ‘Grief is the Thing with Feathers’. Photograph: Colm Hogan

GRIEF IS THE THING WITH FEATHERS

Black Box Theatre, Galway
★★★★☆
At first glance, Max Porter’s debut novel, Grief Is the Thing with Feathers, seems an unlikely candidate for theatrical adaption. Frantic and pacey, the book can be devastating to read, an experience that is not easy to echo on stage. Enda Walsh’s work often situates his audiences as meaning-maker in his work, and this, in combination with Complicité’s trademark audiovisual spectacle, ensures the essence of Porter’s story is made manifest on stage.

Grief explores the turbulent and mind-wrenching anguish experienced by Dad (Cillian Murphy) and his two sons (played in rotation by David Evans, Taighen O’Callaghan, and Felix Warren) after the death of Mum (Hattie Morahan). Careening between careful prose, jarring poetry, and visceral, energetic dialogue, the play sets in motion a scintillating story arc which combines an intense, furious drama and a pervasive, yielding gentleness.

Jamie Vartan’s set design, a sparsely furnished London flat, is littered with doors. However, Dad never gets to escape; he remains ensnared in the interior spaces that Walsh’s theatre navigates so well. Murphy gives a fearsome and powerful performance, balancing a subtle yet electrifying energy as he struggles with Crow as a physical and ephemeral manifestation of grief.

At times, the vast and cavernous space of the Black Box Theatre stage seems to undermine Porter’s original depiction of claustrophobia and entrapment, but this is recovered by Murphy’s physicality as he skilfully traverses this large space.

The constant presence of Dad’s two young sons, pyjama-clad and withdrawn, illustrates the breadth of what is at stake for this deconstructed family unit. The simple domestic acts that pepper everyday life nest into this gross spectacle of grief, creating a new normal. Both young actors (David Evans and Taighen O’ Callaghan on the night) give skilled and measured performances, artfully navigating the absence of Mum and the disintegration of Dad.

The sounds of everyday life are draped like musical adornment in this production. Subtle sounds from the outside cityscape encroach on the space. Similarly, radio and television broadcasts situate the world of the play, as broadcasts report on a destructive world of IRA bombs, extreme weather, and political upheaval. This purposeful placing of the piece into a specific moment in time initially appears at odds with Porter’s timeless portrayal of grief. However, the sounds of conflict and disorder that seep into this space echo the internal chaos of the family’s grief, situating this home as a liminal brink between two worlds.

Ultimately, the power of Porter’s original story is bettered by its theatrical rendering. Throughout the production, an aching odyssey of words is violently scratched and hurled bullet-like onto the fluid surface of this family home. Porter’s words, far from being upstaged by the liveness of the piece, are imbibed by the production, adding a sentience and vitality to the space.

Grief is the thing here, but it is not the only thing. Walsh’s skilful adaption provides his audience with a cacophony of emotions and the power to make their own meaning in this chaotic world.

Grief Is the Thing with Feathers, produced by Complicité and Wayward Productions in association with Landmark Productions and Galway International Arts Festival, is at the Black Box Theatre in Galway until March 24th, and at the O’Reilly Theatre in Dublin from March 28th until April 7th