The performers in Kelly’s new comedy about people and things, say their lines with wit and only occasionally bump into the furniture 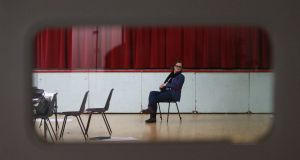 Sonya Kelly’s magnificently funny new play for Druid begins with an unseen minister’s encomium for classic furniture, which has “transcended their humble utilitarian purpose” and become “timeless works of art”. This is at once a deadly serious observation and a perfectly absurd joke: There are chairs too important to sit on.

The irony and insight of Kelly’s comedy is similarly well balanced, across three thematically-connected short plays, in which people relate more easily to things than each other.

In the first, tensions flare between a supercilious husband and a tactile wife – a struggling artist and an indifferent muggle – over the possibility that she might touch the art and set off the alarm: “Oh God!” Clare Monnelly’s Alex scoffs at Peter Campion’s Ed. “I have entangled myself with a woman who beeps.”

Comedy is like a soufflé, a confection that requires a light touch and precision timing, and if the first play doesn’t quite rise it’s because director Cathal Cleary doesn’t follow the frisson of human desire and embarrassment. (When lovers feel ashamed of each other in public, it’s because they know, at some level, they are exposed by their desire.)

The argument roams through the exhibition space, where it might have huddled in tight, neurotic whispers and though both characters are allowed to be right, in witty argument, neither performer leans into their eccentricity.

The second play, an arch send up of passion, consumerism and projections, couldn’t be better. Such is the chemistry between Aisling O’Sullivan’s pristine Stef, a slave to just-so minimalist design (preferably mid-century Danish), and Rebecca O’Mara’s hysterically lubricious hoarder, Dee, (whatever you’re having) who have found each other via a dating app, that they move in together in an ill-considered heartbeat. “You know when you know,” they smoulder.

Beginning with the slow burn of film noir, Cleary lets the romance implode with the acceleration of a screwball comedy, precipitated – in Frances O’Connor’s gleeful design – by the hideous presence of a baggy, purple La-Z-Boy recliner. As Dee’s smile shifts from ditzy longing to panicked defence and finally to weapon, O’Sullivan’s reserve slips from indomitable to vulnerable. “I don’t match your furniture,” Dee realises, aghast. The couple may be doomed, but O’Mara and O’Sullivan are just perfect together.

For a play where the dialogue is so well polished it almost shimmers, it’s a marvel that Niall Buggy’s superbly judged performance, as a flamboyant older gay man in his final days, is most affecting with nothing more than a wordless blink. Bequeathing a frayed and storied pink chaise longue to his nephew (Garrett Lombard), a ramrod-straight solicitor in rugby jersey and deck shoes, George is larger than life but conveyed in micro details; a man transcending humble clichés. The chaise once belonged to Danny La Rue, he says: “Barbra Streisand sat on it. Rudolph Nureyev sat on it… Judy Garland passed out on it.”

In their simering exchange of tart jibes and stoic perserverence, comes a crescendo – a catty insult, a stern rebuke and a blink of contrition – and something like the play’s credo: “Furniture is not sentimental,” George reasons (although, he might not say that of the play): “You can love it, but it won’t remember who you are.” In arguing for the seat’s importance, though, George is really arguing for his own, a gossamer existence that has been very hard won. Like the wallpaper and Oscar Wilde, some furnishings will outlast us, Kelly recognises. The least we can do is put them to good use.

Dancing With The Stars 2019: Jennifer Zamparelli and Nicky Byrne’s zero chemistry a turn-off
10

Dancing With The Stars: singing priest Ray Kelly conjures up the spirit of Father Ted
Real news has value SUBSCRIBE