The Unmanageable Sisters review: A production that doesn’t quite stick 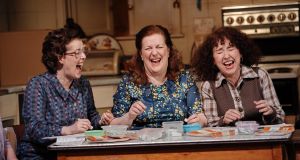 The Unmanageable Sisters: Graham McLaren favours the pleasures of kitsch over the ache of nostalgia

The easiest way to describe Les Belles-soeurs, Michel Tremblay’s groundbreaking piece from 1968, is as a play for voices. In Quebec, where its 15 characters spoke a demotic French dialect called joual, those voices had been seldom heard, considered vulgar by the establishment even before this frank discussion of their lives, their society, their private sadness and their fleeting joy.

Tremblay has found companionable dialects in translation, significantly in a Scots version, The Guid Sisters, in which one woman’s win of a million Green Shield stamps presents an immediate challenge: “That’s gaunnae be a hoor ae a loat ae stamps tae lick.” It’s not the only sticking point.

In its first Irish version, marking the playwright Deirdre Kinahan’s belated debut on the Abbey stage, the play is transplanted to Ballymun in 1974, which does not stop it opening with the 1979 Nolans hit I’m in the Mood for Dancing, announced by Gay Byrne. As Clare Monnelly boogies across the stage it’s the first sign that Graham McLaren, the production’s director, is more inclined to delight in the pleasures of kitsch than explore the ache of nostalgia.

To some extent you can understand that broad comedy: when working-class vernacular has been the voice of the National Theatre since Seán O’Casey, what ground can this play break here? In the “stamp-stickin’ party” hosted by Marion O’Dwyer’s imperious winner, Ger Lawless, we get instead a panoply of character studies and a chorus of experience, as the adhesive of Kinahan’s text fits this nation’s stifling history to Tremblay’s catalogue of woes.

For all the comedy of their synchronised tutting – a chorus of disapproval that meets everything from dancing to higher education – the play is really a study in victimhood, of inculcated Catholic shame that makes the women their own jailers. “Do I look like someone who’s ever won anything?” goes a common refrain, and the irony of Ger’s winnings, items whose place really is the kitchen or the bedroom, is that the play imagines little chance of escape. Even the scandalising rebels, like Catherine Byrne’s outwardly pious Angie Smith and Lisa Lambe’s rock-star-like fallen woman Patsy Guerin, are roundly humbled and humiliated before the play’s end.

The title The Unmanageable Sisters takes its cue from a remark of Éamon de Valera’s that women were “the boldest and most unmanageable revolutionaries”. That may extend the irony in Tremblay’s title – if anything they are cruelly managed, prisoners of the puritanical State de Valera created – but the play makes no case for them as revolutionaries. With no dominion over their bodies, no solidarity in suffering, their pleasures become more bitter-sweet: the promise of ornamental Chinese bookends or, in one ramping harmonic rhapsody, the orgasmic pleasures of playing bingo.

What there is to celebrate in the show, on the other hand, are the heroic displays of its ensemble, their voices merging and soloing like choral singers’ under McLaren’s direction, and Kinahan’s attuned ear for deftly revealing expression. I especially enjoyed the chorus of “aww”s that greet Rynagh O’Grady’s marvellously artless Dolly Snow (who would prefer not to be patronised) and Mary O’Driscoll’s bravura recitation of names at a birthday party, summoning up an entire civilisation.

It’s hard to know what to make of the production’s final flourish, though, marching these divided women through a new female-voiced Amhrán na bhFiann as though in revolutionary triumph. Like the women themselves, it turns out, that doesn’t quite stick.