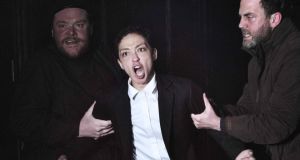 Gate Theatre
★ ★ ★
Hamlet is a drama of decision. It puts almost all of its characters at the crossroads of choice, leading in directions either radical or cautious. To trust or disbelieve? To avenge fast or play for time? To be or not to be?

The Gate Theatre’s brooding new production of Shakespeare’s revenge tragedy, set in a darkly despotic Elsinore constructed entirely from doorways, demonstrates its own decisions, some bold and fascinating, others numbingly traditional.

The most noteworthy is the casting of Ruth Negga as Hamlet, giving this filial avenger a slender presence with large, sad eyes and a troubled brow. Negga’s prince is not a woman (which might have made for a remarkable interpretation) nor, despite gendered indications, a man. Rather, her Hamlet resembles a boy: fresh, vulnerable and sullen, surrounded by looming figures.

In the director Yaël Farber’s version, which edits and readjusts the text, that magnifies the stark impossibility of Hamlet’s task: a small agent of justice in a vast, corrupt machine: “The time is out of joint. O cursèd spite, that ever I was born to set it right!” Right now that sounds like the complaint of the zeitgeist.

If this prince seems subdued by the options, it wouldn’t be the first time Hamlet has been undecided

How can this slight scholar, given to frustrated, scalp-raking rage, single-handedly take down Claudius (Owen Roe), the usurping leader of a rotten state, who proudly dresses like a surplus-store fascist? (The production’s set and costume designer, Susan Hilferty, who gives the soldiers Uzis and berets, and imagines the visiting players as bowler-hatted Beckettians, is not given to immense subtlety.)

Farber hones the play’s divisions into a neater survey of allies and enemies. Here, Aoife Duffin’s sympathetic Ophelia is a soothing, silent party to Hamlet’s first despairing soliloquy – alone at last – before she is brusquely abandoned in a deluge of stage rain. Barry McKiernan’s Rosenstern (collapsing Hamlet’s indistinguishable college pals into one, to no obvious gain but to a conspicuous loss of levity) is the intimate turned informant. Most significantly, Fiona Bell’s assured Gertrude becomes, finally, her son’s confidant, briefed on Hamlet’s plans by Mark Huberman’s solid Horatio.

For the multitudinous qualities of Hamlet, however, this production is surprisingly one-note, like the oppressive drone within Tom Lane’s sound design, broken, occasionally, by sung lamentations. Negga’s delivery will likely gain in precision as the run progresses, but the myriad possibilities of Hamlet are slyly mirrored in others; in Roe’s absorbingly tortured conscience, Duffin’s wild, distressing madness, Gavin Drea’s corrosive vengeance as Laertes, and even the subversive manipulations of the players who set every scene. If this prince seems subdued by the options, it wouldn’t be the first time Hamlet has been undecided.