Shame review: Strutting like a punk diva through a lifetime of self-doubt 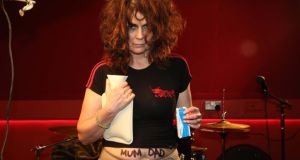 Shame: Pom Boyd has been performing from an early age, in awkward fabrications before grown-ups, or flustered improvisations to cope with social anxiety and regressive gender politics. Photograph: Derek Speirs

Peacock stage, Abbey Theatre
★ ★ ★ ★
Confidence is a faltering performance in this absorbing autobiographical show from Pom Boyd, written with the musician and composer Sean Miller. A jagged memoir of turbulent family history, a lifetime of self-doubt and improvised compensations, it is performed by Boyd with the don’t-give-a-fuck strut of a punk diva, comically undermining the audience and tersely commanding her garage-rock ensemble, in what we come to recognise as another elaborate, defensive act.

Boyd has been performing from an early age, in awkward fabrications before grown-ups, or flustered improvisations to cope with social anxiety and regressive gender politics, the kind of mechanisms that lead naturally into performance. Like the music, it comes with a raw, trashy aesthetic, where mystifying signifiers and found footage gradually reveal their shape.

This isn’t the first show of this fringe – or on this stage – to conceive of mental illness as the gorilla in the room. But Boyd’s recollections of her father’s distressing struggles, her actor mother’s lingering professional embarrassment, and her own distorted self-image are confronted, forgiven and, like the shames of everybody watching, with luck even exorcised.