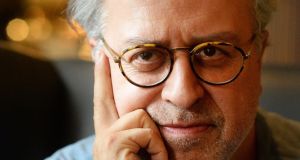 “Incantata” means enchanted, spellbound, bewitched, in thrall to, beguiled by. It’s the title of a long poem by Paul Muldoon, which he wrote in memory of his former partner. Mary Farl Powers, an artist and print-maker, died in 1992. Now this stirring elegy will be premiered at the Galway Arts Festival.

The lengthy text is dense with references and allusions that have me Googling from as early as the second line. “Colder and dumber than a fish by Francisco de Herrera,” reads that line. De Herrera was a 16th century Spanish painter who specialised in baroque still-life, including fish.

Irish-born Stanley Townsend, who has been living in London for some 20 years, will be performing Incantata next month. We’re sitting talking in a Dublin hotel. For the last six weeks, he has been spending at least two hours a day with the text, memorising it, and digging into it. “At the moment, it’s constantly in my head. If I don’t spend a couple of hours each day working on the Muldoon, I get very edgy,” he says.

At the time of interview, it’s just five weeks out from the premiere, but director Sam Yates and Townsend have yet to get into a room together and figure out the performance. What they have been doing over the last three months is spending single days here and there together in London with the text, “mining it and trying to sift through the content, the images. We need to know, or have a theory about, what they mean. It has given time for things to percolate,” Townsend explains.

He takes a while to answer the question of what the poem he will deliver as a monologue is, in his view, about.

“What it is about primarily for me, is an artist wrestling with his grief. It seems he is trying to make a piece of art to remember her, and he is conflicted about doing it. He remembers her then, and all the things they shared: moments, arguments, picnics, people, walks, drinks, travels, smells, tastes, places. If he finds anything through the poem, it is simply to remember her.”

Last year, he was in a revival of David Mamet’s 1983 play, Glengarry Glen Ross, also directed by Sam Yates. “Sam rang me and said, I’m doing this [Incantata] next year, will you have a read of it, and see what you think? When I read it, I thought, oh my god, I don’t know if I can do that. But if you don’t know, you have to try, right?”  Despite his long experience on stage and in TV and film, this will be his debut monologue performance.  After a couple of days, he rang back Yates, and said yes.

Taking a long elegy off the page and staging it is ambitious, but after all, Shakespeare’s plays are mainly composed of blank verse. It was Jen Coppinger of the Abbey Theatre, where she is responsible for producing new work, and Maureen Kennelly, director of Poetry Ireland who came to Muldoon with the proposal that Incantata have another life as a piece of theatre.

“If we get this right, it will be a very intense experience. Poetry is the most intense form of talk,” Townsend says. The running time of the show will be short; somewhere between 35 and 40 minutes.

So what is going to make this piece theatrical?

“As far as the actor is concerned, the voice is primary in the theatre. So how you look in close-ups in film and television, people can see what you’re feeling. But you don’t have that kind of access in the theatre, so people come in through the voice.” While the staging of the show has yet to be decided, director Yates and himself have been discussing using various Beckettian motifs throughout; for instance, a lighting design that illuminates just a mouth. “The poem is veined with Beckett,” as he puts it.

We’re talking in a buzzy, busy hotel foyer, yet I have no problem hearing Townsend’s voice among the general background noise. He’s not even speaking very loudly. It’s an actor’s voice, with a richness and flexibility of tone, and it’s no surprise to hear that in between working on Incantata, he’s also working on other projects; all of which require different accents.

“I have a number of things spinning,” Townsend says. He mines spinning a plate in his right hand while talking about these other projects. “One is called Spy, which is a Netflix series, starring Sasha Baron Cohen. It’s filming in Moroccco, so I have been back and forth to Casablanca and Fez.” He plays a Syrian general.

“The other is a six-parter called Jerusalem for Channel 4, set in 1940s London, where I play a Russian spy. Set in London, but filming in Cardiff. So I’m between Cardiff and Casablanca at the moment, with the odd days in London with Sam. A big part of the preparation for the Syrian general and the Russian spy master is accent work. They’re quite tricky accents.”

I ask him to give me a line of Incantata in the Syrian general’s accent. He looks horrified. “I couldn’t mix the two jobs, my head would be scrambled!” His accent for performing the poem will, in recognition of Muldoon’s Northern roots, have “Northern notes” in it.

His most recent work in Ireland was in what he calls a “soap bubble”. “I did Redwater over here [the EastEnders six-part spin off series, where characters Kathleen and Alfie Moon move to rural Ireland in the hope of finding her son]. They call them soap bubbles; you take a character from a soap, and make a drama using those characters and those actors.”

Townsend originally wanted to be an architect, but “didn’t get enough points in the Leaving,” as he notes, wryly. Instead, he studied maths and civil engineering. “The certainty of a engineer’s world has given me a kind of confidence, a kind of stability and has served me well in what can be a very insecure workplace.”

Meanwhile, he is constantly running the lines for Incantata in his head, and getting ready to go into rehearsal. He hopes the Galway audiences will find the show as visceral an experience as “a punch and a hug at the same time”.

Poet and actor had met the previous night for the first time. “Paul has been very generous in that he says we are free to do what we want with the text.”

Muldoon comes by as we are wrapping up, to talk about the project from his perspective. As well as being an elegy for Farl Powers, the poem is also dedicated to her. “We met in Belfast in the 1980s,” he says. “Mary had a post as print-maker in residence for the Arts Council of Northern Ireland. She made mostly etchings on copper plate and lithographs.” They were together for a couple of years. Farl Powers died of breast cancer in her early forties. “Far too young,” as he says.

He wrote the elegy in three days after her death; trying to figure out how to grieve and commemorate, and to celebrate the life they had had together. “Expression of grief is a public thing as well as a private thing.”

Muldoon sees Incantata as “an emotional roller coaster, and audience members will be along for an emotionally charged ride. It is one of the reasons we go to the theatre; one expects something to happen, and come out changed. Otherwise, what is the point?”

The peaks and troughs of the literary roller coaster eventually bring the reader, as they will bring the audience, to these beautiful closing lines:

on which you’ve etched the row upon row

of army-worms, than that you might reach out, arrah,

and take in your ink-stained hands my own hands stained with ink.

The Beatles split: ‘I was shattered’ – Paul Weller, Booker T and more on the the band’s abrupt end
10