Porcelain review: The perils of being someone else

A young Irish woman is not feeling herself in Margaret Perry’s debut play for the Abbey, which shadows the tragedy of a woman burned to death in 1895 for the same reason 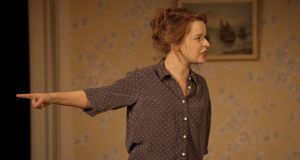 Hat, a young Irish woman living in London, has not been feeling herself recently. “I’d like to be different,” she tells a serene yoga instructor during Porcelain, the professional debut of playwright Margaret Perry. “I’d like to be a new me.”

To some degree, that was the tragedy of Hat’s fellow Tipperary woman Bridget Cleary, burned to death in 1895 by her husband on suspicion of being a fairy changeling – in short, a new her. “I like the idea of a changeling, of having someone be you for a bit,” says Lola Petticrew’s delicate Hat, which is an odd lesson to take from the history.

Alternately impulsive or withdrawn, Hat may have other parallels with Bridget. She is struggling with postpartum depression, and her predicament is interspersed with scenes of an initially confident Bridget (Toni O’Rourke, doing a lot with a little) slipping into a stupor under the aggressively paranoid watch of her husband Michael (Keith McErlean).

Whether subject to a fairy curse or a cyclothymic mood disorder, both women are presented by Perry as echoes across time, two misunderstood figures who might understand each other.

The theatre is a place of unpredictable change, too, the production intimates. Cécile Trémolières’ largely realistic domestic set awkwardly stands in for any number of alternative spaces – a coffee shop, various parties, a modern home or 19th-century cottage – reserving one alcove for a contentedly artificial mountain backdrop. In practice it looks undecided. But director Cathal Cleary is intent to let things mingle: Bridget and Michael, for instance, wear contemporary costume, never interacting with the present, but barely distinguished from it.

In Helen Norton’s Silvertongue, Perry grants Hat a more transcendent interlocutor, like Harper’s hallucinatory confidant, Mr Lies, from Angels in America. Here, when Norton’s comedic shapeshifter finally reveals her true identity, she is an actor out of costume – another kind of changeling. It’s a neat metatheatrical idea which might have been extended to give the production more coherence. Instead, it’s hard to decide whether Silvertongue represents Hat’s manic fantasy or simply an exercise in overwriting, offering the possibility of escape, in exchange for Hat’s baby, with a litany of overwrought metaphors.

Sometimes the play’s structure seems to emulate the surge and subsidence of its characters. “Can we skip this bit?” Hat asks Bamshad Abedi-Amin’s Bill on their first meeting. “Just this is the boring bit and I wonder if we need to go through it?” The consequence for Bill’s character is that he never develops beyond an immediately obliging, implausibly patient boyfriend. But Hat’s question could easily be applied to some repetitive scenes of the Clearys’ worsening home life, or a daft encounter between Bill and an otherwise underused Caitríona Ennis as Hat’s friend Sarah, to whom a distraught Hat has gifted their newborn.

The play, as its title suggests, feels finally like a study in fragility: it’s sobering, for instance, to hear both Bridget and Hat passively tell their partners, “You know best.” But there was more to Bridget (whom Tom McIntyre allowed a more active and transgressive romantic life in 2005’s What Happened Bridgie Cleary). If Hat is somehow a slighter presence still, identifying at one point with a water jug, an empty vessel, it is because she comes across more as a condition than a character. Who wouldn’t want to be someone else?

Keanu Reeves: Everyone is talking about his new girlfriend, and it’s not why you think
7

Helena Bonham Carter: ‘People choose to sleep with powerful people. I got two children out of it’
8 The extraordinary gentleman
9