The Lost O’Casey review: An urgent understanding of contemporary Dublin 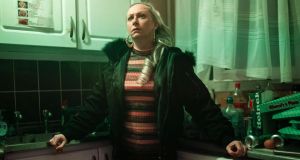 Meet at the Gate Theatre
★ ★ ★ ★ ★
It’s a simple gesture, but it comes with a profound effect: a young woman handing you a keepsake and asking, with no assurance, “Will you not forget me?”

This is Nannie, a woman who already looks partly erased, her face worryingly bloodied and so numbed with booze her eyes barely focus. In Sarah Morris’s extraordinary performance – a marvel even by Anu’s standards of affecting intimacy – Nannie is a woman both tender and tough, a vulnerable soul made hard by circumstance. The fresh jolt of Anu’s production, in this urgent understanding of contemporary Dublin, is that Nannie has been here before.

Inspired by Seán O’Casey’s 1924 one-act play Nannie’s Night Out, itself based on real-life figures slipping through the cracks of a fledgling State, Louise Lowe’s new project resuscitates O’Casey’s characters, shucks them free from the play, and sends them scattering through the city to mingle their stories with present concerns. That it begins with something like an amateur street tour, conducted by Michael Glenn Murphy’s Dublin eccentric prone to blips of memory loss, counts as a poignant joke: these stories have already been lost once before.

Almost everyone we encounter is haunted by loss. The young men we find in a council flat, in an extended wake for the apparent suicide of a friend, seem to have fallen into limbo, where time is made blurry with their stylised movement. A radically reconceived Polly Pender (the tremendous Gillian McCarthy) harangues them for their idleness, confronting Daniel Monaghan’s glazed absent young father in the kitchen, with the lacerations of people who live on top of each other.

That is literally the case as you may move with her through flats earmarked for demolition, pausing, perhaps, in the stairwell to hear of how the first tenants threw miraculous medals into the setting foundations, soon to be reduced to rubble again. What remains of their experiences, or Polly’s vivid dreams, or the burning regrets of Robbie O’Connor’s one-time contender – all expressed at electrifying close proximity?

Everyone will have a different experience of The Lost O’Casey, which sheaves its small audience into pairs or solo experiences, but the encounter likely to burn brightest is Nannie’s check-in with Leanna Cuttle’s harried medic in a mobile clinic. Like most characters, their meeting is not without warmth or caring but is so easily shattered by one wrong pivot, as regrettable as it is forgivable. In echoes of O’Casey’s play, we still hear dark meditations on leaving “a Nannie-shaped hole in the Liffey”, but it chimes with a Dublin again reeling from uncannily similar epidemics of homelessness, abandonment, abuse and the societal shrug of helplessness. Here, everyone is contemplating their own annihilation, and something infinitely crueller: the loss of their memory.