Wexford have too much for Limerick on Division Four return 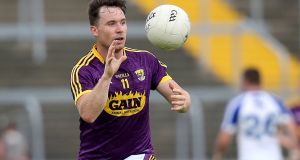 At the resumption of the season after seven months, Wexford and Limerick played out an exciting Allianz Football League tie in a wind-swept Mick Neville Park on Sunday afternoon.

Wexford - who had the strong breeze in the opening half - were back in league competition with their Munster opposition for the first time in six years.

And it was Shane Roche’s side who started the better of the two, scoring from three of their first four attacks, as Limerick were left to rue a slow start.

Initially, Limerick struggled to keep up with Wexford and trailed 0-6 to 0-1 after 15-minutes and Wexford held an eight point lead at half time - 1-8 to 0-3.

Limerick, however, spurred on by a stern half time talking-to and three changes at the interval, recorded the first four scores of the second half.

The first of which involved substitutes Sean McSweeney and Tommy Griffin - the latter finding the back the net as his fisted effort got the better of Pa Doyle.

Wexford responded with three points of their own and as a McSweeney effort was saved Doyle, the in-form Brosnan extended the lead to six points, at the other end.

McSweeney came close again in the dying moments as Limerick maintained the effort in the third quarter but a Brosnan point from play ensured Shane Roche’s side were victorious.

Unbeaten Khabib to retire after UFC 254 win over Gaethje 10:12
Justin Thomas finishes with a kick to lead by one in California 07:46
Ulster aiming to douse Dragons’ fire and extend unbeaten start 06:00
A season like no other: The key games that helped Shamrock Rovers secure an 18th title 00:18
Liverpool come from behind to beat Sheffield United 00:19
Crossword Get access to over 6,000 interactive crosswords