Brendan Maher surprised at timing of introduction of yellow sliotar

‘It’s a massive shock to us. The first I saw of it was on Twitter’ says Tipp stalwart 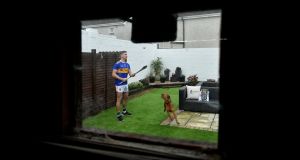 Tipperary’s Brendan Maher with his pointer dog Oscar, at his home in Borrisoleigh. Photo by Brendan Moran/Sportsfile

The GAA’s decision to make available a new championship sliotar in any colour as long as it’s yellow has been the source of mild surprise and muted discontent, Tipperary hurler Brendan Maher admitting the timing alone is certainly questionable.

“It came as a massive shock to us,” said Maher. “The first I saw of it was on Twitter on Friday, that it was being introduced, and I was thinking ‘’why now?’

“We’ve been playing games under lights for years with the normal sliotar, and there’s never been an issue. So timing-wise I do think it’s up for debate, but obviously it’s in now, we need to start training with it, get used to it.

“And it is a change, something we need to adapt to. Because whether you’re used to using certain types of sliotar, most teams would be using the official sliotar, and now we’re trying to get our hands on this one, getting used to it over the next few weeks. So I was very surprised that the change was made considering everything that’s going on, and to throw something else into the mix was a bit of a surprise.”

The GAA announced the decision on Friday afternoon as part of the updated regulations for all upcoming inter-county fixtures and that “for all games in the 2020 GAA Hurling All-Ireland Senior Championship (including the provincial championship) officially approved sliotars with yellow leather shall be used for all games (sliotars with white leather cannot be used)”.

Maher’s only previous playing experience with the yellow sliotar was in the Super-11s challenge at Fenway Park in Boston in 2017: “Which is three years ago at this stage, and what it will be like under lights I just don’t know, I haven’t actually experienced it yet.

“I actually had a few pucks with one on Saturday, during the day, but that’s different. We’ll have to see what it’s like now training under lights, starting tomorrow [Tuesday] night, and we’ll take it from there.

“From a player point of view I’ve yet to hear of a player complain over lack of visibility with the white sliotar under lights. I know myself I’ve never had any problems with it, it’s something you get used to. Most of the time it’s the quality of the floodlights that would be the issue, not the sliotar. And I think in the big stadiums we’re not going to have that issue with the lights. “

RTÉ analyst and former Cork All-Ireland winning goalkeeper Donal Óg Cusack said at the start of the 2019 league that the change in colour “can’t come soon enough”, and Pat Daly, GAA director of games development and research, told the Irish Times in February of 2019: “All of the advice we’ve been getting from people involved in the game, from authority to commentary to columnists as well, is that for feature purposes, it would be better if the sliotar was yellow. That’s the preferred colour, the best colour, and we would be in line with that.

“The white-coloured ball doesn’t always do what is required, particularly under lights, and there is evidence there we’d be much better off with the yellow ball. If you look at other sports, tennis had the same problem a number of years ago, with the white tennis ball, which was causing the same problems in terms of clarity.”

Brendan Maher was speaking at the launch of Bord Gáis Energy’s sponsorship of the 2020 GAA Senior Hurling Championship.