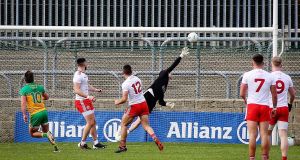 Donegal’s Peadar Mogan scores their first goal of the game during the Allianz Football League Division One clash with Tyrone. Photo: Lorcan Doherty/Inpho

It was a sign of the times that Donegal’s squad were able to amble along the street and through the turnstiles before going to war with Tyrone.

It has been 31 weeks since this fixture was originally slated before Covid-19 pulled the rug from under it.

With spectators closed out, a dozen or so hardy souls peeked through the fence as Donegal impressed to consolidate their Division 1 status.

In two weeks’ time, the thunder rolls for an Ulster Championship meeting of these fierce old foes and it’s very much advantage Donegal.

“There was a real focus and a steely determination in there,” Donegal manager Declan Bonner said as goals by Peadar Mogan and Jamie Brennan shot his men to a useful win.

“We spoke about what it would be like and we are quite happy with the overall day.

“It was surreal coming in to play Tyrone. We were fit to walk from the hotel with not a being about. We had a job to do and I always knew that these lads were ready for a big challenge. They took on the challenge and met it. We’ll have a big, big test again in two weeks’ time.”

Brennan’s pair of early points gave Donegal a head start. Much had been and gone during the lockdown, but Donegal still had relegation’s cold finger on the shoulder as they made their way to an eerie arena.

But they got the perfect start with a goal after only eight minutes. In one drop of his right shoulder, Mogan left Frank Burns, Tiernan McCann and Michael McKernan in a muddle. By the time their bearings had been found, they were left to watch Mogan shrug off Darren McCurry and arrow past Niall Morgan from 15 metres.

Mogan’s goal had Donegal four in front, but Tyrone were level by the 14th minute as McCurry beat Shaun Patton from a penalty awarded when Stephen McMenamin was controversially deemed to have fouled Conor McKenna.

The Eglish man has just returned from a six-year spell with Essendon in the AFL and certainly brings an imposing presence to the Red Hands.

Donegal hit four-in-a-row through Ryan McHugh’s brace, a free by Ciarán Thompson and a neat effort by the impressive Niall O’Donnell.

Five minutes into the second, Caolan McGonigle’s turnover sent Donegal on a counter-attack. Murphy released Brennan and his neat finish was right into Morgan’s bottom corner.

Bonner said: “The goals were top class. They were both really good finishes. Our play in general wasn’t bad. We still have a bit to go. There was a natural bit of rustiness.”

McKenna fired in a consolation goal for Tyrone, who finished with 13 men as Kieran McGeary and Rory Brennan both saw red in the closing stages with Brennan appearing to lay a hand on referee Jerome Henry.

Mickey Harte, the Tyrone manager, said: “It appears that was the case, but laying of hands is a very broad term - maybe he touched his arm to make his point, I don’t know. I hope it isn’t seen as serious as that.

“I don’t think Rory is the kind of guy who would be doing anything like that. If he did it would just be the impulse of the moment, to ask him or to question, ‘What happened there?’”