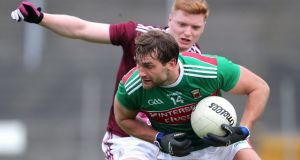 Aidan O’Shea on the ball during Mayo’s thrashing of Galway. Photograph: Bryan Keane/Inpho

It would have been a day for Mayo to lock the gates and make their old enemies watch - had there been anyone inside to watch. And if Padraic Joyce had to endure the worst day since he first walked into a Galway dressing room, then he was fortunate that there were no worshippers allowed into the ramshackle football cathedral in Tuam town.

Mayo looked like a team reborn here. Lockdown has suited them. 2-17 is a ferocious score to pile up against any opposition in a single half of football but the visitors were good value for it. They overwhelmed Galway early here and didn’t let up.

Reasons for Mayo supporters to rub hands in anticipation bloomed all over the field. Oisín Mullin looks set to join the long line of excellent, mobile, ball-playing Mayo defenders. Mark Moran had a tidy 1-2 to his name by half time in an excellent performance. Patrick Durcan further embellished his reputation as the least-spoken name in the elite tier of best footballers in the country. The most encouraging thing for James Horan was that this win gave him a further chance to dispel the myth that his team are the grand old men of the championship.

“We had five U-21s out there and we brought on two more. A lot of the young players who have come through are really talented. Mark, as he has been for Westport all season, is very comfortable on the ball.”

The selection of Aidan O’Shea at full forward was the single biggest reason why Galway suffered here. The home team couldn’t cope with the Breaffy man’s physical presence and menace and under-valued ability to bring his team-mates into the score. He had a hand in the first five Mayo scores and caused air raid sirens to sound in Tuam stadium every time Mayo lobbed a high ball in his general direction. Like all of Mayo, he was noticeably sharp here and, in the novel year when you can hear the players, he hardly opened his mouth.

The contest felt over from the moment Mark Moran coolly slotted home his 14th-minute goal, pouncing on a few seconds of fatal hesitation in Galway’s defence. By then, Galway had lost Damien Comer to a hamstring injury, an outcome more serious than the result. And Mayo had begun to turn the screw on Conor Gleeson’s restarts and there was nowhere for Galway to go: the short option looked highly risky and when it came to the breaking ball at midfield, Mayo were like the lad outside the Blue Thunder with the curry chips at quarter to three in the morning. They were ravenous and didn’t care who saw it.

Joyce watched on silently as Mayo trampled all over his team and the impressive work Galway had delivered before the break. Maybe this was just the bucket of iced water they need at this stage of the season. At the very least, it was a portent of what awaits them if the All-Ireland championship gets the green flag.

“When you are not tuned in you are not ready for battle and we picked up a couple of knocks at centre back and forward. We were chasing shadows at that stage anyhow.”

“They are a good side. But no matter who we were playing today, anyone would score what Mayo scored the way we played. We just stood off our men and didn’t get involved or make any contact. There were lads coming off the pitch there at half time who hadn’t broken sweat. When you are playing your fiercest rivals if you need to motivate lads they are in the wrong game.”

There were so few positive points for Galway here. Paul Conroy was a conspicuous influence, Conor Campbell had a lively hour in hugely challenging circumstances and Tom Flynn came in to spoil a little of the fun Mayo were having around the middle of the park. Still, when Conor Loftus slipped home Mayo’s third goal just before the water break in the second half, it was 3-20 to 0-14. It hardly seemed real.

And, of course, there was a nagging doubt about how much we could trust what we were seeing. Both these teams are expecting to meet each other for real in a knock-out game in a few weeks. On a miserable day, Galway still fired 0-17 of their own-including six frees from Rob Finnerty. Only their last score had the kind of purpose and flow with which they lit up the first part of the season. And for all those scores, it was the last minute before referee Maurice Deegan had to reach for his card. The edge and meanness that these two bring to the really significant days was not there.

But a run out, Mayo left Tuam happy with a good day out.