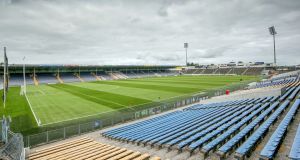 Tipperary had too much for Offaly at Semple Stadium on Sunday. Photograph: Laszlo Geczo/Inpho

Tipperary took a giant stride towards preserving their Division Three status in the National Football League with this fully deserved win over Offaly at Semple Stadium, Thurles.

For both teams the stakes were high. Offaly needed success to maintain their push for promotion, and this lapse sees them drop out of contention.

They can have no complaints. Tipperary were the better side throughout. They led 0-5 to 0-3 at the first water break, and the decisive score came in the 31st minute when Conor Sweeney converted a penalty after Michael Quinlivan was dragged down. Kevin O Halloran missed two further great goal chances for Tipp who led at the break 1-8 to 0-9.

In a competitive third quarter the sides shared eight points but Tipp suffered a setback when Jack Kennedy was black-carded in the 53rd minute.

They kept their composure to deny Offaly possession, outpointing their rivals four to two in the closing stages.

For an under performing Offaly, Bernard Allen, Eoin Rigney, John Moloney, and Peter Cunningham did most.