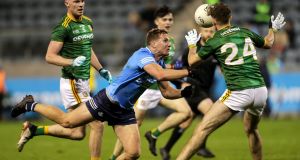 Parnell Park was a chamber of echoes on Saturday night. Echoes of the past, actual echoing shouts of players on the field and in the bleakness of this darkening season the insistent thought that what we see may well end up the merest of echoes from a football year that could end as soon as it restarted.

History was made in this most incongruous of settings. Stephen Cluxton emerged for the 20th season of his extraordinary time in blue and, in doing so, eclipsed the record of his predecessor from a century ago Johnny McDonnell who had been Dublin’s longest-serving player.

Showcasing these milestone achievements was a strange but earnest encounter between the All-Ireland champions and an already relegated Meath team, which resembled nothing so much as an O’Byrne Cup match in January.

The difference now is that – at least in theory – the championship awaits in a couple of weeks. With that in mind, what could the teams take from this?

Dublin’s Dessie Farrell was appointed before last Christmas but apart from the zippy schedules of the league programme earlier this year, abandoned in February, he has had no normal opportunity to build according to his plans. It’s no different for any other manager but for a new appointment to the team that’s just broken new ground with five-in-a-row?

He picked 10 of the All-Ireland winning side but there was little novelty to the performance. Cian Murphy, the Thomas Davis corner back, made his debut and was lively and Robbie McDaid got a run but otherwise the defence was in familiar hands, making it a concern that Jonny Cooper had to leave injured in the second half with no immediate indication as to the gravity of his ankle knock.

The victory was in a way perfunctory. Once Meath’s early lead had been overhauled by Rock’s fifth-minute goal, it was never returning but Dublin kept them at just arm’s length rather than whipping distance.

It took significant contributions from the establishment attack – 0-4 from play for both Con O’Callaghan and Ciarán Kilkenny and Rock’s 1-8, 1-3 from play – to put the match away and an early grip that tightened to seven points relaxed as the game unwound but the margin generally bobbed around three or four points.

Cluxton, playing his first match since the All-Ireland last September, looked sharp. Good and necessary saves from Cathal Hickey and a shepherding job on Shane Walsh prevented goals but his restarts went occasionally astray but such impressions are often disproportionately based on the shock that any inaccurate kickouts cause.

In the end, he failed to complete just five from 28 or 18 per cent.

His opposite number, Meath’s Mark Brennan had a more serious issue, being put under particular pressure at the start of each half and coughing up twice as many as Cluxton.

His eternal goalkeeping anxieties aside, Meath manager Andy McEntee saw much to encourage him. His team weathered the early storm and took the fight to Dublin whose defence looked suspect in the face of good running by Cillian O’Sullivan and Donal Keogan.

Overall, Dublin coughed up eight converted frees – as many as they conceded in both last year’s All-Ireland final and replay.

With last year’s top gun, Mickey Newman out for the season, there were productive contributions from Meath corner forwards Thomas O’Reilly – whose flawless place kicking got his team back into the game and Shane Walsh, with 0-4 from play.

Eleven wides, though, holed the comeback beneath its waterline and for McEntee it was still a work in progress.

“We want to be winning games like that. Where were we tonight? Four points away. You throw in three one-on-ones and numerous missed point opportunities and that’s the difference. In all sports it’s about scoring. It’s the scoreboard that counts at the end. That’s why Dublin are where they are and have been for the last while.”

Farrell may not harbour the same urgency about the coming Leinster championship as his Meath counterpart but he was grateful for small blessings.

“Obviously, that uncertainty was out there but it’s a lot better position to be in than where we were at the start of the lockdown when we thought everything was gone for the year. Look, you just get on with it and make do and embrace what comes your way. We’re just delighted to be back now at this stage.”

Mayo’s Stephen Coen: ‘Favourites, underdogs – really, it’s irrelevant’ 06:00
Could Jacob Stockdale be the second playmaker Ireland needs right now? 01:00
Andy Farrell staying calm amid pressure to end first year in charge on a high 01:00
Not good enough that IRFU kicks for touch on schools rugby 01:00
Eddie Brennan gets straight back in the game with Dublin champions Cuala 00:07
Crossword Get access to over 6,000 interactive crosswords