Jason Sherlock believes Mayo may benefit from not being crowded out 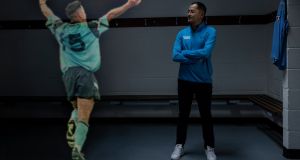 With further restrictions around Covid-19 being implemented in the North and seemingly South of the border too it’s virtually certain the entire 2020 championship will be played out without any spectators.

Former Dublin football coach and All-Ireland winner Jason Sherlock says this may well impact on different teams in different ways, but reckons Mayo may actually benefit from escaping the extra pressure or expectation that sometimes comes with having home supporters out in abundance.

“There are other teams that kind of you’d feel they could be playing anywhere and it doesn’t impact them,” says Sherlock. “Off the top of my head, the one I’d be interested in is Mayo.

“I think Mayo have probably embraced emotion but they’ve also I think suffered sometimes with the emotion of crowds and situations in games, so it will be interesting to see what impact it has on all teams.”

For most teams, including Dublin, Sherlock believes the lack of spectators won’t make any difference to their championship challenge.

“I heard David Clifford talking about playing schools matches in Croke Park, so he’s used to playing there with nobody there. So it’s going to be new for everyone and every year, every championship, every match, it’s about adapting to the scenario, to the situation, and I’ve no doubt Dublin will prepare as well as they can.

“But I think they are going to impact on everyone. And I think as a fan, as I am, I’d be interested to see what teams embrace the challenges and the ones that are obviously challenged by it.

“If I was involved and looking towards league games and then the championship, there is an additional layer of protocols that Covid has brought in and that is going to be a challenge for every team, and from a logistics point of view. Then going into environments without fans, that will be interesting because there are teams and systems that lend themselves to having a crowd behind them and support there.”

There will be a few things different about Dublin’s challenge, however: Sherlock served as football coach for their five-in-a-row under previous manager Jim Gavin, and the retirements or unavailability of players like Diarmuid Connolly, Bernard Brogan, Jack McCaffrey and Darren Daly.

Speaking at the launch of the 2020 Electric Ireland GAA minor championships, Sherlock also believes that Dublin manager Dessie Farrell has been left in something of a void since the league was postponed over seven months ago.

“I think, from the management’s perspective, you could look at it in two ways. From a positive, it has kind of made a complete distinction between last year and this year with the longer break than normal. I suppose the downfall for that is I’m sure Dessie has struggled to kind of get a look at players and kind of bring his own thoughts and ideas to the set-up as quickly as he could. So I’d imagine that is the potential challenge for Dublin, and every team going into the championship.

“I suppose that’s the hardest part, when you don’t have that contact time to see those guys and see how they are progressing. So yeah that void is still there and it has probably been a bit false this year, because there has been no football so it will be interesting if and when we get championship football, it will be interesting to be looking in rather than being involved as I have been for the last few years.”