Clifford shines, Kerry win and some normality is felt in Monaghan 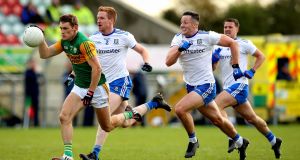 In Grattan Park, the outside world melted away. Kerry and Monaghan played the first bit of intercounty football in 230 days and there was a bit of solace to be got in it. Kerry were pretty good, Monaghan were pedestrian, David Clifford was on his usual other planet. Only for the masks and the silence and the pre-match traffic jam of sponsored cars with KY number plates snaking through the Monaghan backroads, it almost wasn’t surreal at all.

When it was over the Kerry players hopped back in their cars and headed to the Nuremore Hotel out the road for a shower and a feed before the five-hour drive home. The decision not to travel collectively was recognised by the Monaghan county board beforehand, with the tannoy man saluting the sacrifices they’d made to come and play. In strange times, people will do a lot to feel normal.

And for the most part, that’s what this was. A few locals stole through the hedge at the back of the low goals, a crowd about a dozen strong. But they never really had a whole pile to get noisy about. Clifford scored the opening point in the opening minute and Kerry led from there to the final whistle. Monaghan summoned up a sprint finish late on to take the bare look off the scoreboard but ultimately this was a comfortable win for the visitors.

“We’re delighted to be back,” said Peter Keane afterwards. “We’ve been waiting six or seven months so we’re happy to be here. You don’t get taken away by silverware. It was the next game and it was important to win today because if you didn’t you wouldn’t be in the hunt for it. Look, there are other games to be played tomorrow and next week so there is a lot of things that can happen before silverware.”

Whether it means anything, of course, the coming days will decide. This could be the last game we see all year or it could be the start of a GAA winter the likes of which nobody has seen before. For Seamus McEnaney, the defeat was disappointing. But nowhere near as tough to take as any putative cancellation of the championship would be.

“For me, there’s no grey area here,” he said. “I think the GAA, the championship, all of it is very important for the mental health of a lot of people in the country. First of all, our players and their families. Second of all, half a million or maybe a million people will watch some sort of intercounty game this weekend. We need that. The country needs that. And I think in a very safe environment, it needs to happen.

“We’re very fortunate, we have a strong medical team, the protocols are very strict within our group. And I think if every county team enforces it that way, we will get through this. It’s very important for the people of the country that the championship goes ahead.

“There are no grey areas for me. The GAA is important to every corner of every community in this country and the country needs the championship to go ahead.”

If and when it does, McEnaney’s side will need a much sharper edge than the one they brought here. The looked every bit a side who hadn’t played a game in seven months. They took a while to get going and frequently turned the ball over, leading to a 0-5 to 0-2 deficit at the first water break. By contrast, Kerry’s interplay was altogether more patient and assured.

Peter Keane’s side had three defenders on the scoreboard before half-time, Paul Murphy, Jason Foley and the excellent Gavin White all getting themselves on the end of passing chains that left them in space to score. Kerry led 0-10 to 0-5 at the break and would have been further clear but for a missed open goal by Tony Brosnan five minutes short of the half-time whistle.

Clifford was shadowed by Conor Boyle for the afternoon and while the Monaghan full-back did what he could, the boy prince was a threat every time Kerry attacked. His movement had Boyle on the turn all through the game and any time he had him one-on-one, the umpires were instinctively reaching for the flag. He ended the day with 0-6 to his name.

Monaghan’s main bright spark came off the bench in the shape of half-time substitute Conor McManus. The three-time All Star took five shots and scored five points and, not for the first time, showed a cutting edge his teammates lacked. Whether it will be enough to see them avoid relegation and make a run through Ulster, only the coming weeks will tell us.

And if the plug is pulled and everything is cancelled, it was good for the soul at least to be at a game again.

1 Sam Bennett struggles as Roglic wins Stage 10 of Vuelta
2 All-Ireland Senior Football Championships: a county-by-county guide
3 Bennett punished for pushing his luck to fall foul of VAR’s narrow line
4 Jackie Tyrrell: We’ve got the championship back. But where’s the physicality?
5 History suggests England should keep their part of the bargain
Real news has value SUBSCRIBE