Fermanagh relegated from Division Two after defeat to Clare 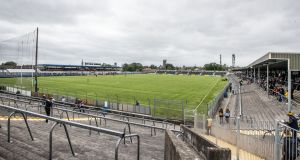 Fermanagh were relegated after their defeat to Clare in Ennis. Photograph: James Crombie/Inpho

Fermanagh were relegated from Division Two of the Allianz Football League at Cusack Park, Ennis when they lost out by two points to home side Clare.

A Joe McGann goal in the 31st minute put Clare in the driving seat at half time, enjoying a 1-6 to 0-6 advantage at the whistle. Both sides missed early goal chances with Clare’s Jamie Malone blazing wide in the seventh minute and at the other end, a few minutes later, Fermanagh’s Conal Jones did likewise.

Fermanagh had more goal chances in the second period with Darragh McGurn forcing Clare keeper Eamonn Tubridy into a fine save. Later Aidan Breen saw his shot come off the upright only for Declan McCusker to shoot wide from the rebound. They did pull back a goal in injury time through Eddie Courtney but it was to be the last score of the contest.

Fermanagh brought a much depleted squad to Ennis due to Covid-19 and after the game their manager Ryan McMenimen said: “I’m proud of the lads, I’m proud of the younger boys. I think it’s the story of our season. We should have been coming away with the two points.

“I think we were far and away the better team. But Clare are seasoned campaigners. (Eoin) Cleary is a very good player and the big score for me was the one he got just before half time. But it’s been our story all the time. We hit the post when it should have gone in and we gave away a soft goal. He (Joe McGann) should never have got in.”