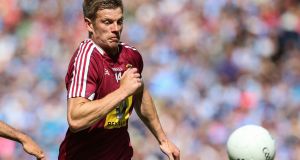 Westmeath were full value for their eight-point winning margin against Laois in the rearranged Allianz National Football League Division 2 match played in ideal conditions for football in Mullingar on Saturday afternoon.

Westmeath’s marquee player, John Heslin, had tweeted his concerns during the week about the resumption of intercounty activity, but the St Loman’s, Mullingar man was in majestic form in the opening half, kicking half of his side’s dozen points (three of them from open play off either foot).

The home team played some outstanding football in the first half, with Ray Connellan and Ronan O’Toole both scoring a brace each from play. Laois’s first four points came from frees, and their fifth score came courtesy of Gary Walsh on the half-hour mark when the corner forward might have found the net. Westmeath led by 0-12 to 0-5 at half-time.

Despite Diarmuid Whelan opening the scoring in the second half with a great 40th minute point (moments after his manager Mike Quirke had been banished to the empty stand), the visitors never looked like making any serious inroads into the deficit as Jack Cooney’s men continued to keep the scoreboard ticking over.

Heslin’s first score of the second moiety came from a 59th minute free, and his club colleague O’Toole followed up with arguably the point of the day to put his side ahead by 0-16 to 0-8. Any lingering doubts about the outcome were dispelled when wing back Jamie Gonoud slapped the ball to the net from point-blank range in the 63rd minute.