Kildare tune up nicely against Cavan as uncertainty rules 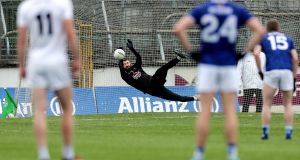 Jack O’Connor let out a softly audible sigh of relief when the lonesome whistle blew. The Kildare manager had extra reason to make this one count, not least given his one day 630km roundtrip from St Finians Bay.

It may be uncertain if or when next weekend’s final round will go ahead, only for now this lifts Kildare out of a relegation position, and in seemingly good health for a championship that may never happen. Still O’Connor looked worried, and for real.

“Other authorities will make that decision, all I know is a lot of counties are having problems, playing getting testing during the week, all the uncertainty around that, maybe someone will call a halt,” he said, Kildare also losing a player last week after he returned a positive test for Covid-19.

“We certainly want to keep playing football, because that’s what we train for. Players would certainly be devastated if there wasn’t a continuation, after putting their lives on hold. But when lads are working and mixing with other people it’s probably only a matter of time before there are problems.

“Thankfully we’d enough bodies to put on the field today. To be honest, we’re just trying to focus on the game ahead of us, you can’t think too far ahead, and you can’t go half-hearted at it. This was almost a championship game for us, because we certainly don’t want to be playing our football in Division Three next year.”

Up 10 points at the second water break, midway through the second half, Kildare almost let that lead slip by the second minute of injury time, when Cavan substitute Niall Murray was clear in front of goal, only to let the high passing ball slip through his fingers. Jimmy Hyland then belted down the other end to kick the outright winner.

Fergal Conway’s excellent goal on 51 minutes after coming off the bench gave Kildare their first proper cushion, the inside forward line of Ben McCormack, debutant Darragh Kirwan and Hyland finishing with 0-15 between them, wing back Kevin Flynn also kicking three fine points at play. That greater scoring ambition and execution just about saw them through.

Cavan’s chances of promotion also slipped by the end, although for manager Mickey Graham that seemed the least of his concerns: “Being honest, it’s very hard to get team morale going at this time. The craic within any squad is in the dressing room, before and after training, sitting down having the meals together.

“These lads will just jump back in the car now and drive back to Cavan, without a shower, and we’re just blessed today with the weather and it’s not raining, not miserable. They’ll grab a meal and sit and eat it in the car, that’s the reality of it. Every day the phone rings you’re hoping it’s not someone else who’s been in close proximity.

“We’ve been hit rightly with it, of the 38 man squad, we were down to 24 today, had to bring in two lads to make it up. We’ve had to put lads into isolation, and there’s definitely a spark missing. We are grateful we can get out to play sport, but if the Government make a decision and say that’s it we’ll respect it.”

Level three times in the first half, Cavan let Kildare jump four points ahead, 0-13 to 0-9, and missed the chance to close that just before the break when a penalty taken by Martin Reilly (after a foul on Padraig Faulker) was superbly saved by Mark Donnellan; Kildare then outscored Cavan 1-4 to 0-2 before that second water break, and despite the brilliant place kicking from Chris Conroy and the lively replacement Caoimhan McGovern Cavan just ran out of road.

Another win at home to Laois next Saturday would keep Kildare safe: “We were living on our wits at bit at the end, but the lads showed great determination,” added O’Connor. “We were a bit leggy in the end, and that’s because the lads didn’t have 70-plus minutes in the legs in the last few months, but I think that will stand to us next week.

“But I’m not going to lie, it can be mentally tough, the uncertainty of it all, on management and players, you don’t know when the rag is going to be pulled from under you.”

With that O’Connor headed for his car: “I don’t stop, I just drive straight. The back might be feeling the pinch every now and again but in general it’s grand.”

1 Seán O’Brien: Anger over my parents’ break-up never left me
2 Hugo Keenan and Will Connors: The best of friends, the best of debuts
3 Ireland 50 Italy 17: Ireland player ratings
4 France warm up for Ireland with impressive win over Wales
5 Ireland get the job done against Italy to keep alive Six Nations hopes
Real news has value SUBSCRIBE