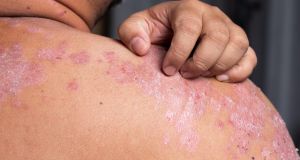 First recognised in 1808, and erroneously associated with leprosy until the 1840s, psoriasis is a skin condition that continues to defy treatment for many sufferers. For 158 years, however, the pages of The Irish Times have been used to both proffer them the latest medical advice – from arsenic to nude sunbathing – and to advertise a plethora of lotions and potions.

As the last century got under way, the paper’s Health Hints column regularly recommended popular prescriptions. In 1903 correspondent “Kildare” is advised to take an arsenic solution, “ a dessert spoonful three times a day, to be gradually increased, unless it causes sickness…”

Topical suggestions were also unpleasant. In 1902 reader JW is told to apply an ointment containing “chrysophenic acid” but warned, “It stains the linen so that it will not come out and you should use old underclothing.” Correspondent “Thomond” is advised in 1907 to try an ointment of liquouris carboni picis, hydrargyri ammoniati and paraffini mollis – coal tar, ammoniated mercury and paraffin.

It’s no surprise that sufferers then, as now, were prepared to undergo distasteful treatments, as the scaly skin condition can be uncomfortable, itchy and unsightly. A 1989 study of Dublin patients found that 75 per cent avoided up to five of the following activities – swimming, sunbathing, visiting a hairdresser, playing sports, communal showers or baths, dancing and leaving their home.

One sufferer, who should have stayed in his own home, became the subject of the 1957 forensics column Science and Crime: The Scotland Yard Laboratories. It recounted:

“A house was broken into through a window and some property stolen. On the window sill was noticed a circular silver patch, and inside on the table a similar patch. On laboratory analysis they were found to be flakes of skin… One of the police officers knew a local thief suffering from the skin disease, psoriasis, and the man was soon apprehended.”

While the thief’s skin landed him in prison, the severity of the condition could also necessitate admission to other institutions. An account of a 1924 governors’ meeting at Donnybrook’s Royal Hospital for Incurables recorded that Josephine McTighe, who had psoriasis, was one of five candidates voted for selection as a patient. The board rejected 11 other “distressing cases afflicted with consumption, heart disease, paralysis and rheumatic arthritis” in her favour.

In 1872 Beatty’s, a reassuringly “non-mecurial and perfectly safe lotion”, claimed to be an “infallible” remedy, while by 1886, for the price of “13 stamps”, readers could write away for a pamphlet by Dr S Berry Niblett, with directions for “diet and baths”. In 1887 the mineral waters of Woodhall Spa were being promoted for “scrofula, rickets, eczema and psoriasis”, as well as “diseases peculiar to women”. And by 1900, Burgesse’s Lion Ointment, which for decades had claimed weekly, “Another Leg Saved” from being “taken off”, added psoriasis to its list of “cures”.

Sulpholine Lotion appeared from the mid-1870s, and promised to “totally destroy” old skin disorders. This “harmless fluid” was one of many “secret remedies” to come under investigation by the British Medical Association, which disclosed in 1912 that it contained zinc oxide, calcium sulphate, glycerin, rose water; and its main ingredient was sulphur – brimstone.

One particularly ill-considered ingredient, however, was radium, a component of Dr Saubermann’s Radium Salve, touted by advertorials throughout 1909 as a cure not only for psoriasis but a range of illnesses and ailments including wrinkles, rheumatism, cancer growths and swollen knees.

By 1916 Domino Brand announced it would take on every other “alleged skin cure” for £100 in a “skin challenge”, while Gibsol Skin Balm claimed to be the “safest, speediest and most efficacious remedy yet discovered for psoriasis”. In the 1920s, the makers of Germolene used the purported testimonial of a navy veteran from the first World War – who developed psoriasis after being torpedoed and spending two hours adrift – to persuade potential customers.

Small ads offering treatment by chemists, herbalists, hypnotists and beauty clinics continued up to the new millennium. However, far more importantly for patients the paper also heralded new innovations and research, including a 1951 visit to Dublin by Prof Edward Kendall, the biochemist who discovered and developed cortisone. In the following decades the pioneering of light therapy, the impact of fish oils and the opening of a specialist day clinic at Hume Street Hospital all merited coverage.

The paper also recorded the first meeting of the Irish Psoriasis Association in 1976, which was reminded that there were 80 million psoriasis sufferers worldwide and the condition “was neither infectious nor contagious and could only be inherited”. That article was written by journalist Christine Murphy, a sufferer herself, who in a subsequent article that year about the condition and treatments, discussed Israel’s international psoriasis treatment centre on the Dead Sea, where sunbathing without clothes was encouraged.

“Nude sunbathing assumes a highly moral and therapeutic purpose for us psoriatics, “ she wrote. “If the sun helps and psoriasis is on your bottom, it would seem very unreasonable not to expose your bottom to the sun.”