‘I’m fine except for the cancer!’ 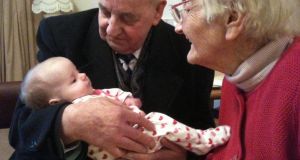 Kate with her grandparents, Martin and Mary Cummins, in Thurles on February 14th, 2011.

“I’m fine except for the cancer!” was a phrase often uttered by my father. This was a reference to the fact he had never smoked or drank in his life, so, despite the terminal illness, he ironically took pride in the fact he was otherwise well.

I think his ability to find humour during the darkest of moments, his determination to doggedly fight back, and his candid approach to talking about the disease helped him to demystify cancer.

When he was about to undergo an operation to treat his throat cancer 13 years ago, I tentatively asked the surgeon if he thought the operation would prolong my father’s life long enough for him to walk me down the aisle 13 months later. The doctor, understandably, couldn’t commit.

I didn’t want to take the chance of not having my father by my side as I took those all-important steps to a new and exciting chapter in my life and so, over the next few days, Andrew and I discussed our options. We decided to bring our wedding plans forward, which meant we had just 13 weeks to plan our big day. We chose to get married on Friday, January 13th, 2006. Superstitious beliefs, it seems, remain strong among some people in Ireland because by choosing that unpopular date, the same church, hotel, band and photographer were all still available to us despite the much earlier booking.

I dreaded telling my father that I’d brought the wedding forward. True to form, he quipped: “So you think I won’t be around in a year’s time, eh?”

I rebuked his black humour by saying I was confident he would still be with us, but highlighted there were no certainties in life. The reality was his impending operation had made us, as a couple, assess what was important to us. We had already been together for five years, knew we wanted to get married so we felt it made sense not to wait any longer. While I relayed this reasonable response with confidence to my father, inside I was scared. I didn’t want to think about him not being around.

A well-known businessman in our home town, Thurles, my father was a larger-than-life, complex character. He and my mother had built up a thriving business together and reared 11 children before I came along. While they clearly loved each other and my father was quite demonstrative towards my mam, he couldn’t show love for his children either verbally or through physical affection. He came from a house where “tough love” was the dominant way to interact with children and, unfortunately, he adopted this approach with most of his own children. There are 20 years between my oldest sibling and me, so by the time I was born, my father had mellowed significantly. Thankfully for me, our father-daughter relationship benefited hugely as a result. My mother used to say to me: “God help you whenever you fall off that pedestal that he has you on!”

When I first heard my father might be seriously ill, I didn’t believe it. My sister called me out of the blue one evening and I could hear the nervousness in her voice. She said tests my father was due to take the next day were for something more sinister than any of us had initially expected. I couldn’t process it. He had always been a terrible patient – even for the most minor of ailments, he used to take to the bed and my mother, who had the patience of a saint, used to nurse him devotedly even though her own health was probably in a poorer state than his at the time. He always seemed invincible; he always bounced back.

I don’t think the severity of the situation hit me until the day I was sitting on the hospital bed with my father and the doctor broke those three words to him: “You have cancer.” The man, not known for public displays of affection, cried into my arms and I cried with him.

Once he had gotten over the initial shock, he and my mother agreed he would undergo whatever treatment was necessary. The subsequent months were difficult. We rented an apartment in Dublin for my mother near St Vincent’s Hospital so we could all come and go as we pleased while he underwent his treatment and she could visit him daily, with ease. The operation was a resounding success. Not only did he walk me down the aisle on Friday, January 13th, 2006, but for the next five wedding anniversaries, he used to call me on the day and joke, “You of little faith, I’m still here, years later, to wish you both a happy anniversary!” It made me smile every time.

Throughout 2010, however, his health deteriorated, and he spent much of that year in and out of hospital. On December 13th of that year, Andrew and I welcomed our first child at Waterford University Hospital – a baby girl we named Kate. I didn’t expect my father to visit me that day as he hadn’t been driving of late due to his ill health, but it transpired that nothing was going to come between him and meeting his 13th grandchild for the first time. One of my most precious memories is of him walking into my hospital room, beaming with pride. Firstly, because he was so chuffed that he had safely driven down by himself to surprise me and secondly that he was about to hold this precious new life, brought into the world by his youngest daughter.

Over the next 11 months, I enjoyed bringing Kate to spend time with her grandfather; sometimes at our family home in Thurles but then more frequently at hospital. On the day of her first birthday party, I was once again flabbergasted that my father had made the journey from Thurles to Waterford to celebrate her special day with us. I found myself watching him a lot that day – his bloated face and tired limbs were a stark reminder that his time with us was limited.

The following week, he accepted my invitation to spend Christmas at our home in Waterford but sadly he never made that journey. Instead, I spent Christmas Day by his hospital bedside in Thurles, chatting with him and singing his favourite Christmas hymns. When I said goodbye to him that evening, I leaned down, kissed his forehead and said I loved him, to which he cheekily responded, “I know you do”. Even with death looming, I thought to myself this stubborn man could still not bring himself to say “I love you”.

In the early hours of December 28th, 2011, my siblings and I sat around my father’s hospital bedside, relaying stories and singing songs until we all drifted into a comfortable silence. Not long after that, he took his last deep breath and then closed his eyes forever. Having successfully battled cancer for more than five years, he was now ready to be at peace.

The year my father died, the Solas Cancer Support Centre opened its doors in Waterford city, providing a much-needed service to the people of the south-east. For the last seven years, the centre has been doing remarkable work to demystify cancer. Thousands of people have attended the centre, where they can talk things over, relax and express emotions. The centre promotes awareness and educates people about cancer prevention, the early diagnosis of cancer and recovery from the disease.

Thirteen years on from when my father was first diagnosed with cancer, I’m taking part in the Solas Cancer Support Centre’s Run and Walk for life. It’s the 10th year of the centre’s biggest annual fundraiser. This year, they have revised the route from a 10-mile run to a 10km run/family walk, so it will be my first time running the route.

While my father is no longer physically with me, I’ll be running in his memory, keeping his fighting spirit alive, every step of the way.