From the Archives: In 1897, physician James Sawyer confided his recipe for reaching 100 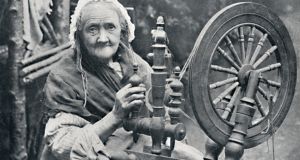 At a time when life expectancy was far lower, many column inches in The Irish Times were dedicated to the topic of longevity. Photograph: Print Collector/Getty Images

It is now possible that the majority of children born today will become centenarians, while the prospect of living 120 years may be realistic, according to Irish scientists.

However, at a time when life expectancy was far lower, many column inches in The Irish Times were dedicated to the topic of longevity, both celebrating those who had attained it and advising how to achieve it.

Accounts of exceptional old age were frequent. In 1860 came news of the burial of 103-year-old John May, in Freshford, Kilkenny, who “ . . . a few years before his death made a pair of shoes without the aid of spectacles”.

In August 1864 reports of the death of the remarkable emigrant Patrick Maunsell (107) reached Ireland from Brisbane. “He was born in the year 1757 and was for 90 years in the service of Lord Clare. He left Ireland seven years since, and was therefore a centenarian when he landed in Queensland. ”

A report in the newspaper in 1866 provided details of a woman “named Roche” in the neighbourhood of Buttevant. In her 110th year she “ ... enjoys the perfect possession of her mental faculties, and scarcely one of her senses is seriously impaired ... Her face is wonderfully fresh” and “up to within a very recent date she read without spectacles”.

Another 110-year-old, Margaret Holohan, remained in good health at the Birr Workhouse in 1896. “She says she was never sick ... her sight is good and her appetite excellent, a very slight deafness being her only ailment.”

Pain in the head

That same year weaver John Hennue (107), who “was never a day sick in his life”, died in Clifden. He had gone to work the week of his death, but “on Tuesday he complained of a pain in his head – the first he ever felt – and his wife, alarmed at the unusual occurrence, went for the priest. He died peacefully on Thursday from sheer exhaustion of nature.”

The prospect of living as long as these examples was regularly used to advertise products – such as Rowland’s Odonto in 1860, as apparently “sound and white teeth are indispensable ... to longevity, by the proper mastication of food” while “invigoration, health and longevity” was promised by north Californian Zifandel wine in 1890.

Others, however, disagreed on the life-extending properties of alcohol.

In 1883 Dr CR Drysdale addressed the British Medical Association on the comparative mortality of abstainers and moderate drinkers. The statistics, he insisted, showed that, “even a moderate daily consumption of any alcoholic fluid was detrimental to life and longevity ... and like ether, chloroform, and opium, was in its right place only on the shelves of the apothecary”.

The quest for longevity also prompted some radical research.

From Paris in 1889 came reports that “eminent scientist Dr Brown Sequard” claimed to have found a way of extending the span of human life by “inoculating the aged and debilitated with the nerves of young and vigorous animals”. His claims, our reporter noted, “will be observed at home with mingled feelings of curiosity, amusement and scepticism”.

An article in 1897, however, furnished more practical recipes for long life from some old people. “One antique old soul, whose birth took place prior to Waterloo, sucks a lemon morning and night. Another gentleman, well nigh as old, takes a glass of salt and water upon rising.”

The account also details the “very strange” habit of one “hale and hearty” octogenarian. “Every morning at breakfast she has a raw turnip cut into thin slices and placed between bread and butter. In promoting longevity, she believes the juices of turnips are unrivalled.”

One contributor to long life in Ireland was hinted at in 1881, when the census of that year showed 690 centenarians. Munster, readers were told, contained the greatest number, 85 men and 205 women, and “it is in the mountainous districts, near the coasts of the Atlantic, that centenarians most abound”.

And, in 1897, renowned physician Sir James Sawyer confided his recipe for reaching 100 to a Birmingham audience.

1) Eight hours sleep
2) Sleep on your right side
3) Keep your bedroom window open all night
4) Have a mat to your bedroom door
5) Do not have your bedstead against the wall
6) No cold tub in the morning, but a bath the temperature of the body
7) Exercise before breakfast
8) Eat little meat, and see that it is well cooked
9) (For adults) Drink no milk
10) Eat plenty of fat to feed the cells which destroy disease germs
11) Avoid intoxicants, which destroy those cells
12) Daily exercise in the open air
13) Allow no pet animals in your living rooms; they are likely to carry about disease germs
14) Live in the country if you can
15) Watch the three Ds: drinking water, damp, drains
16) Have change of occupation
17) Take frequent and short holidays
18) Limit your ambition
19) Keep your temper

1) Sleeping secrets: undress in the dark, walk around the room and lie east-to-west
2) Cooking for invalids: wine, brandy, porter and champagne for all
3) Eat fat, no milk, open bedroom windows: 19 rules of long living
4) Looking for bloody cures for women’s periods

So you want to do the splits? Apparently, even the stiffest people can
6

Fish and chips: How to cook them just like the chipper does
Real news has value SUBSCRIBE