Fundraising for heart disease was no plain sailing 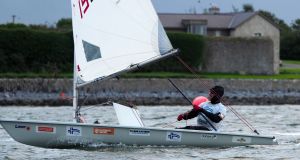 Richard on the final leg of his round-Ireland journey.

When Tipperary physiotherapist Richard Hayes wanted to take a closer look at some of Europe’s highest sea cliffs, he took the best part of 54 days and a 2,500km round trip to do so.

There were also three capsizes, two storms named Hector and Ernesto, seven days lost to lingering fog as he circumnavigated Ireland solo in a tiny dinghy, with the back-up of his extraordinary family.

His father Michael, a retired veterinary surgeon, navigated every ditch and dune and hillock of the coastline in a camper van which served as his son’s bedroom, kitchen, office, equipment store and more, while sister Libhín tracked his every movement at sea from her home in Kilkenny and sister Michelle focused on fundraising.

“Libhín used a Spot Tracker to pinpoint where I was at all times, and I trusted her completely with my life – and would do it again,” Hayes says.

Hayes has lived in Galway for the past 15 years, and chose to undertake the voyage for west of Ireland cardiology foundation Croí for a very particular reason. His mother, who introduced him to sailing on Lough Derg when he was just eight years old, died some years later of a heart attack. There was no access to a defibrillator which might have saved her.

“It took six months to plan the voyage, which had two main aims – to highlight the preventable nature of cardiovascular disease and stroke, and fundraise for equipment like defibrillators,” he says. While this island has been circumnavigated many times in many craft, from kayaks and currachs to larger cruisers, an unsupported solo sail is a rare enough event.

The smallest keelboat to have achieved it was a Belfast Lough Waverley Durward less than 6m long, sailed by brothers Kevin and Colm McLaverty and Mick Clarke in 1961, while Dungarvan sailor Máire Breathnach undertook a mainly solo sail in an 8.2m sloop in 1999.

However, the Laser One which Hayes sails is only 4m long, less than the length of two kitchen tables and very exposed in heavy swells. Two Laser sailors have completed the circuit previously – Rob Henshall of Fermanagh some 18 years ago and Gary Sargent of Howth Sailing Club in 2016.

No support at sea

Like Henshall, Hayes had no support at sea. He estimated it would take six to eight weeks when he set out from Galway Bay Sailing Club in Oranmore in late May. However, June’s heatwave was a setback, with almost no wind.

“I remember staring at Slyne Head for hours on end,” he says. “And then by the time I got to the north Mayo coast, the weather had changed completely – I was storm bound for days, and the local fishermen were right when they told me it would take five to six days to blow through.”

Part of the preparation had involved dividing up the coastline into manageable passages, and identifying hazards and safe havens. Drawing on local knowledge was also essential, so each evening was spent rehearsing the next day’s sail and talking to fishing skippers, RNLI lifeboat and Irish Coast Guard crew where possible.

“I had no interest in taking chances, but had to be prepared to be very patient,” Hayes says.

“My dad would pack my lunch each day in the boat and he would know in the evening if I hadn’t touched it that I’d had a rough day. He’d also know not to say anything and to leave me alone for a while!”

Many high points included rounding Donegal’s Malin Head and taking on the treacherous tides between Rathlin Island and the Antrim coast.

“By the time I got to Cork, people knew I was serious, and then Dursey island and the Blaskets off Kerry also required careful planning,” Hayes says. His first of three capsizes was off the south Kerry coast, between Skellig Michael and Puffin Island in heavy swell.

He was tied onto the boat and righted himself, but had to capsize again, deliberately this time, within the hour to get through the bridge before Portmagee. The third capsize was in some surf in Ross Bay off the Clare coast, but he was within 100 yards of shore.

Staying mentally focused was a challenge – particularly when approaching imposing sea cliffs and stags which would require a wide berth.

“At times, I would take it minute by minute . . . setting many little Everests worked,” he says.

He and his father encountered many kindnesses en route. “There were people who offered us beds, gave us meals and coffee, and farmers who gave us a tow with the boat up sand dunes with their quad bikes,” Hayes recalls.

His one abiding worry was that he would hate the sport he loves with a passion by the time he had finished.

“You see, with no autopilot and no time to relax, I was always tense. It was only on the penultimate leg, from Liscannor in Clare north, that I began to relax. I could see Black Head when this pod of five or six dolphins, some of them young calves, appeared around me and several were darting diagonally across my bow . . . ”

Richard Hayes is still fundraising for Croí at idonate.ie