Suicide and taxi drivers: ‘I’m going to be one of them’ 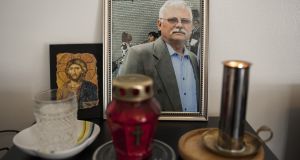 A photograph of Nicanor Ochisor, who took his own life in March, at his family home in New York. After six professional drivers died by suicide in the city, taxi drivers are talking more openly about depression. Photograph: Kholood Eid/The New York Times

Both men were long-time taxi drivers from Romania. Both were worried about paying their bills. They were best friends. And both had struggled with depression.

Nicanor Ochisor’s wife dragged him to a doctor in March to get help.

Two days later, he took his own life in his garage.

“I didn’t know he was so depressed,” his friend, Nicolae Hent, said. Hent had taken antidepressants. He wished he could have told Ochisor that it would get better. “I didn’t know. I still feel bad even now – why I didn’t know that,” Hent said recently as he drove his taxi in Queens, New York.

Ochisor was one of six professional drivers to take his own life in New York in the last year – a crisis that has prompted a flurry of legislation to address the despair plaguing the industry. Most were men in their 50s and 60s, anguished about their finances and feeling hopeless about being able to retire.

Many taxi drivers are under incredible stress, but Ochisor’s story shows how difficult it can be to convince those with severe depression to talk about it. Life behind the wheel of a taxi can be solitary and the job tends to attract independent-minded people who might not feel comfortable talking about emotions that can carry a stigma.

The recent string of suicides and the publicity they have received are now prodding drivers to speak more openly about their mental health – with one another and with their families. As their industry struggles, the conversations among drivers are different, from sharing photos of their grandchildren or talking about hobbies like winemaking, to discussing how they are going to survive.

Lal Singh, a taxi driver for three decades, said he had thought about suicide as he endured long hours driving his taxi and worried about paying off the loan he had taken out to buy it.

“When I hear that somebody did suicide, I was thinking about me,” Singh said as he waited at the taxi parking lot at Kennedy International Airport. “I’m going to be one of them one day.”

Singh, who is 62, owes about $6,200 (€5,400) a month on the taxi medallion he bought in 2000. He often drives a long stretch of Manhattan, from Harlem to Wall Street, looking in vain for passengers. “When you have nothing to do, we are suffering,” Singh said. “What are you living for?”

At the airport taxi lot on a recent afternoon, driver after driver complained of mounting debt and of feeling abandoned by the city, which has made millions of dollars selling medallions.

One taxi driver, Muhammad Anil, said his children had seen the headlines about the suicides and asked him if he was okay. Anil, (57), told them he was fine, though he is concerned about the more than $500,000 (€430,000) he owes on his medallion. “I don’t want them to worry about me too much,” he said.

Middle-age drivers may be particularly vulnerable. The suicide rate for people between the ages of 45 and 64 has jumped in recent years, more than for other age groups, said Barbara Stanley, a psychology professor at Columbia University.

It is a similar story in Ireland, where men are four times more likely to die by suicide than women and the highest suicide rate is among those aged 45-54.

Suicide, though, is a deeply personal decision and it is difficult to know for certain the factors that drive a person to make that choice.

The drivers, Stanley said, “might have been depressed in the past or had a vulnerability to depression and you combine it with these terrible environmental stressors and that’s a recipe for disaster”.

Still, many drivers are resistant to the idea of therapy. “They’ve driven their whole lives,” said Meera Joshi, the city’s taxi commissioner. “There’s a tremendous amount of pride involved, rightfully so. Part of our messaging is that there’s no shame to needing mental health help.”

At 70, Harbans Singh still works 12-hour shifts in his taxi to pay off his medallion debt. Singh said he was not interested in counselling, adding that he relied on his Sikh faith.

Two days before his death, Ochisor saw a doctor and started taking an antidepressant. But it was too late. “He was worrying too much,” Hent said. “He told me many, many times, we have to work until we die.”

Gabriel Ochisor has taken over managing his father’s taxi, which his mother Helen and another driver still operate. The taxi failed a recent inspection because of a ripped seat. “I can see why you would get stressed and pull your hair out,” Gabriel Ochisor said.

Hent sought help from a doctor around 2005 after a crippling anxiety attack, due in part to the stresses of his job. He started taking two antidepressants and learned coping strategies. He took up tennis. “I saw how many people are sick in America” with depression, Hent said. “I said, ‘Oh I can take care of this’.”

Now Hent, who is 62 and owes about $130,000 (€113,000) on his medallion, is pushing the city to assist taxi drivers. He spoke at a recent council hearing, waiting three hours for his turn – time spent away from making money in his taxi.

“I’m not going to kill myself,” Hent said. “I won’t kill nobody. But I’ll fight until I die.” – New York Times