The country on track to eliminate cervical cancer

In a decade, the disease could effectively be eliminated as a public health problem in Australia 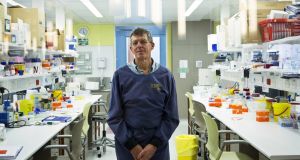 Cervical cancer could be eliminated in Australia within the next two decades because of a government program to vaccinate children against the cancer-causing human papillomavirus, according to a new report.

The study, published this week in The Lancet Public Health, found that by 2028, fewer than four women in every 100,000 could be diagnosed with cervical cancer annually in Australia – effectively eliminating the disease as a public health problem. And by 2066, the researchers say, less than one woman per year could receive that diagnosis.

“Australia is on track to become the first country to eliminate cervical cancer,” said Karen Canfell, a cancer epidemiologist and the director of Cancer Research at Cancer Council NSW, the organisation which led the study. “I think this shows the way forward for other countries.”

Australia’s national health care system first introduced the vaccination program in 2007 as a cost-free three-dose course for teenage girls. In 2013, the program was expanded to school-age boys, who can carry and transmit the virus, and develop other forms of cancer. According to the Cancer Council Australia, the vaccination has led to a 77 percent reduction in the types of HPV most responsible for cervical cancer. Australia now has one of the lowest cervical cancer incidence and mortality rates in the world.

Researchers attributed the rapid decline in HPV to a combination of efficient government action – which saw the vaccination program implemented in schools nationwide – alongside screening programs for older women and widespread public support.

Canfell said that while the vaccination had played a crucial role, cervical screening had also been important in reducing rates of HPV in older adults who might have already been exposed to the cancer-causing virus. “If we only focused on vaccination,” she said, “we wouldn’t be able to address this issue for hundreds of millions of women.”

Other countries have moved more slowly, partly because of a global anti-vaccination movement that has falsely claimed vaccines are linked to autism and illness.

While most developed countries have now implemented some form of the vaccination program, the path has been fraught, said Ian Frazer, a co-creator of the vaccine, Gardasil, and a professor of immunology at the University of Queensland. He attributed those problems to the challenges of implementing a vaccination program at a national level, and widespread misinformation regarding the risks of vaccines.

In Japan, for example, fear campaigns have helped cause the rate of HPV vaccinations to plummet from 70 percent to close to zero. And in the United States – where a 2017 survey showed that nearly half of people aged between 18 and 59 are infected with genital HPV – the rate of vaccinated teenagers is only 49 percent.

In the 2014/15 school year in Ireland, 87 per cent of girls aged 12-13 years received the vaccinations, though that figure dropped sharply to 50 per cent the following year, before rising again to 62 per cent in 2017. That increase only came about after the Irish Cancer Society warned that, statistically, at least 40 additional women would die as a result of the fall-off from 87 to 62 per cent – a drop caused at least partly, it said, by the spread of misinformation about the vaccine on social media. Boys in Ireland are not part of the vaccination scheme, though the Government has pledged to include boys from next year.

“It takes a lot of education to get there, it doesn’t happen overnight,” Frazer said. He added that even vaccinating half a population, however, could be enough to halt the spread of HPV enough to see significant declines in cancer rates.

But, he said, inequities in public health might mean these declines are concentrated in only certain parts of the population.

Globally, cervical cancer is still the world’s fourth most common type of cancer in women, and an additional 570,000 cases are expected this year alone. The burden of disease is predominantly in low- and middle-income countries, many of which have yet to adopt their own HPV vaccination programs. In those countries, screening is doubly important, Canfell said.

But even in Australia, the researchers said that continued screening and vaccination would be crucial to maintaining low cancer incidence and mortality rates. “We are thrilled with this news, however, we don’t want women to get complacent,” said Leisa Ashton, a spokeswoman from the Australian Cervical Cancer Foundation.

Australians should feel lucky, added Ashton, that their government had recognised the merits of the vaccination.