The institution that Dubliners hoped they would never enter

Westmoreland Lock Hospital: A glimpse into life at the hospital for treating venereal disease 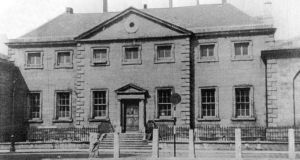 The Westmoreland Lock Hospital was an institution that Dubliners hoped never to enter. Relocated to Townsend Street in 1792 to treat widespread venereal disease, it stood until the 1950s on the site adjacent to The Irish Times.

Females only were admitted from 1819. Some, but by no means all, were prostitutes. Syphilis and gonorrhoea were rife in the 19th century, particularly among soldiers. However, unlike Cork, Cobh and the Curragh, Dublin never came under the jurisdiction of the Contagious Diseases Acts, which allowed any woman suspected of being a prostitute in the vicinity of a garrison to be checked for disease and kept without consent at a “Lock Hospital”.

Pregnant women gave birth here and many infected infants died. Treatments were lengthy and, until the introduction of penicillin in the 1940s, included mercury or arsenic-based cures. Funded by a State grant, and occasionally by the War Office, the hospital continued to operate for almost the first century of this paper’s lifetime, with thousands of women and children passing through its doors. Readers, however, received very little insight into its workings, or its patients.

Here are just a few glimpses into life at “The Lock”.

April, 1863: The Board of Superintendence of the Dublin Hospitals reports: “The laundry portion of the establishment acts as a penitentiary . . . a greater number of convalescent females could be placed in the laundry if there were employment for them.”

November, 1870: “James Shaw was brought up. . . charged with having committed an indecent assault on a little girl named Mary Strong, in a yard off Bull Lane. from the effects of which she had to be conveyed to the Lock Hospital. The case was proved by the child and a doctor who examined her, but the details are unfit for publication.”

April, 1873: The board’s annual report: “The walls and ceilings . . . could not be white-washed, cocoa-nut mattresses could not be supplied in place of straw for bedding, and the dilapidated roof could not be repaired owing to the want of means.”

January, 1878: A report from the Army Medical Officer notes: “Venereal disease is very prevalent, especially in the Dublin garrison . . . it is to be regretted that the funds of the Lock Hospital are only adequate for the maintenance of a portion of this invaluable institution in working order.”

March, 1878: A report of the board remarks: “One feature of the Westmoreland Lock Hospital which we particularly admire is the utilisation of the labour of the patients, combining as it does the advantages of a reformatory system with those of a well-regulated strictly managed hospital.”

November, 1885: The Hospitals Commission hears evidence from visiting physician Dr Fitzgibbon that, “some of the patients had been in the hospital no less than 12 times”. Many “frequently left while they were very bad” because of the restrictions under which they were placed. “One of these was that all letters were opened and read . . . ”

The doctor told the commission that accommodation for Protestant married women was insufficient. He was in favour of separate accommodation for Roman Catholics and Protestants being done away with, and separate wards introduced instead for women who had previously been in the hospital. “At present, numbers of the Roman Catholic women of the better social position, so to speak, said they were Protestants in order to get into the Protestant ward. This they did in order to be separated from the lower class women and also for the purpose of avoiding the priest.”

March, 1886: The inquest of Elizabeth Doyle is reported. Following an assault by a soldier the injured woman asked to be brought to The Lock, where she died. “The evidence showed that the deceased, who was about 18 years of age, had been leading an abandoned life for several years . . . ” The hospital’s resident medical officer told the coroner that: “Few accident cases were admitted into that hospital, but girls of the unfortunate class preferred going to the Lock Hospital in preference to any other, no matter what ailed them.”

July, 1887: A young inmate of the hospital, Anne Evans, is charged with attempted suicide. Resident physician Dr Donnelly told the court he had given the patient a bottle containing opium to cure a toothache, “but instead of applying it to that purpose the prisoner had drunk the contents”.

August, 1909: Report of the board: “It is a dreary place, from which one comes away depressed . . . Of the 473 treated during the year, 25 were sent to Magdalen Asylums; four to other hospitals; 11 to workhouses; five were taken on in the hospital as ward maids; five as laundry maids; 81 left contrary to medical advice; 18 were discharged for insubordination; 14 were restored to friends; 31 were sent to extern department.”

April, 1912: A local government inquiry is held into a complaint from Joseph Holland that his seriously ill wife had been transferred by ambulance to the Lock Hospital instead of the Mater. “Here in spite of her protests, she had to submit to the usual routine imposed on the ordinary patients of that institution, which included a forced and unnecessary cold bath.”

June, 1913: Homeless woman Margaret Reilly is charged with murdering her two-month-old child. “Nurse Woodhouse, of the Westmoreland Lock Hospital, gave evidence . . . the clothes the child was wearing were those given to it at the hospital. Constable Crowley stated that when the prisoner was arrested she stated that her husband gave her no money, and she threw the child into the Liffey after leaving the Lock . . . ”

October, 1946: The hospital is re-named St Margaret of Cortona. A meeting of its governors is told: “Conditions for the patients have been improved lately . . . the most important of which are changes in diet, and the addition of recreational facilities suitable to this particular type of patient. An almoner also has been appointed.”

In a 2009 Letter to the Editor about The Lock, Susannah Riordan, School of History and Archives, UCD, notes that in the 1940s: “Most of the women were young unmarried mothers, referred by county homes which had neither the ability nor the will to treat them.”

Fire your internal drill sergeant, it’s time to be kind to yourself
4

Period homes in a tech neighbourhood: two to rescue on Pearse Square from €600k
9

Do Irish people hate babies? Our irritation with them is embedded in our culture
Real news has value SUBSCRIBE