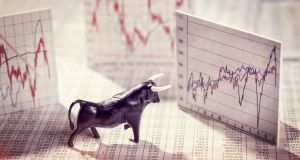 Is the bull market about to end?

The amount allegedly embezzled from the Ireland Funds of America between 2015 and 2017 was $711,875, according to latest filings for the New York-based charity. Ciarán Hancock has the details.

Plans forreform of the State pension have now been put back to 2021, Minister Regina Doherty has conceded. Dominic Coyle reports

Boston-based money manager Eaton Vance, which manages nearly half a trillion dollars in assets, has opened an office in Dublin ahead of Brexit, writes Eoin Burke-Kennedy.

Maximum Media, the Irish digital media group whose sites include Joe.ie, has hired a new chief executive as the business seeks to chart its way out of a turbulent six-week period. Mark Paul reports

John FitzGerald inches his way through the fog of data that surrounds our economic performance.

Peter Hamilton meets Prof Ruth Maher who had developed an aid for women with bladder issues.

In Agenda Joe Brennan warns investors that the bull market is living on borrowed time.For today’s thirtysomethings, writes Fiona Alston, the employment scene in Ireland has gone from the post-crash recession when any job was welcome to a market coping with severe skills shortages.

Tanusree Jain tells us that the right mix on a board is crucial in the prevention of corporate social irresponsibility. Inside Track meets energy-saving contractor Conor Walsh of Encon. Brexit Proof talks to Rebecca Harrison of Fishers of Newtownmountkennedy and this week’s Wild Geese subject is Elaine Brennan of Northwell Health.