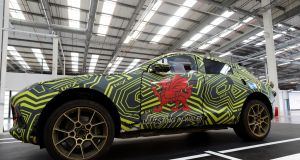 The new Aston Martin DBX inside the new factory in Wales. Shares in the company, which were priced at £19 (€23) when the company floated last year, have tumbled sharply since then

Aston Martin has held talks with several potential investors about raising fresh capital through an equity sale, according to four people familiar with the matter.

A capital injection from outside investors is one of a number of options being considered by the luxury British carmaker to help bolster its squeezed finances. Other alternatives include a rights issue, these people said.

The company has held meetings over recent weeks with a number of potential investors, including Lawrence Stroll, the Formula 1 billionaire, as well as other carmakers and potential investors from the Middle East, India and China.

Of the talks, those with Mr Stroll are at the most advanced level, one of the people added.

Shares in Aston Martin, which were priced at £19 (€23) when the company floated last year, have tumbled sharply since. They fell 8.7 per cent to £5.62 on Friday after the Financial Times reported the talks about a potential equity raise.

In response, Aston Martin confirmed that it was “reviewing its funding requirements and various funding options. It is also engaged in early stage discussions with potential strategic investors in relation to building longer term relationships which may or may not involve an equity investment.”

The latest fundraising is the third time Aston has been forced to seek financing within a year as it battles falling sales and a collapse in investor confidence in the 14 months since its initial public offering.

Shares have lost three quarters of their value as the business made two straight quarters of losses and battled with overstocked showrooms.

The luxury carmaker is seeking additional funding to help it bridge the gap until sales of its SUV model, the DBX, begin in the second quarter of next year.

A spokesman for Racing Point said the team “does not comment on speculation and rumours”.

Reports of Mr Stroll’s interest in acquiring a stake in the business were first reported by Autocar Magazine earlier this month. Aston’s shares rose 18 per cent on the day of the report.

The group has been stung by the tightening global car market, higher inventory levels at its dealers and the underperformance by its entry-level Vantage sports car.

In the last quarter, Aston reported a pre-tax loss of £13.5 million, caused by slowing sales. – Copyright The Financial Times Limited 2019