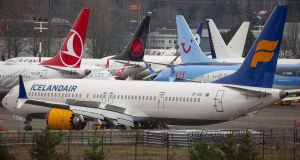 Boeing plans to halt production of its grounded 737 Max in January. Photograph: Bloomberg

An Irish-based aircraft leasing company that buys and leases planes is suing Boeing in the US to void contracts for almost two dozen 737 Max aircraft and to demand at least $185 million (€ 166 million) in damages, citing design flaws that led to two deadly crashes.

Timaero Ireland, based in Dublin, sued Boeing on Tuesday in federal court in Chicago, alleging fraud and breach of contract in deals it signed starting in 2014 for 22 of the jets. The company said it relied on Boeing’s assurances that the planes were safe and would be delivered on time.

After crashes of 737 Max planes flown by Lion Air in October 2018 and Ethiopian Airlines in March 2019 killed a combined 346 people, the planes were grounded and a flaw in the flight-control sensors has been blamed, Timaero said.

As of Tuesday, Boeing was supposed to have delivered four of the 737 Max jets to Timaero, but has delivered only two, the leasing company said. Boeing has refused to refund Timaero’s advance payments on the planes, according to the lawsuit.

A spokesman for Boeing had no immediate comment on the lawsuit. – Bloomberg

1 How can I view my dead brother’s will if I’m not the executor?
2 Facebook faces $9 billion tax trial in US over Irish offshore deal
3 Investors pile into Irish property as turnover in build-to-rent sector reaches €2.54bn
4 Provisional liquidator appointed to Dublin engineering firm
5 Travel costs for IDA chief topped €45,137 last year
6 Kerry’s Chinese sales set for 30% hit from coronavirus
7 Legal row erupts over €85m contract
8 Bursting of Tesla bubble a case of ‘not if, but when’
9 Glencore to shake up its top tier with younger leaders
10 US reiterates opposition to Huawei equipment being used for Irish 5G
Real news has value SUBSCRIBE