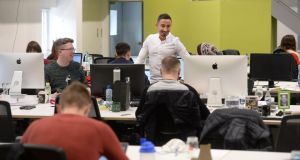 Maximum Media, the Irish digital media group whose sites include Joe.ie, has hired a new chief executive as the business seeks to chart its way out of a turbulent six-week period.

The business, which is majority owned by media entrepreneur Niall McGarry, has hired accountant John Feeley, who has worked in senior finance roles in cinema advertising, the hospitality sector and for property developer Paddy McKillen.

Mr Feeley will join a four-member executive team that will have complete operational control over the Irish business. The other members of the executive group include chief financial officer Ronan Doolin, chief commercial officer Gillian Fitzpatrick and executive chairman Justin Cullen.

Mr Feeley will not have any involvement in Maximum Media in the UK, which runs Joe.co.uk. That business, which is also majority controlled by Mr McGarry but with a different shareholding structure, is separately run.

His appointment comes in the midst of a difficult time for Maximum Media in Ireland. Its difficulties arose last month when the Core media group, the largest ad-buying agency in Ireland, withdrew all campaigns from Maximum Media.

It did so over concerns that in 2017 a so-called “click farm” was used to falsely inflate listenership numbers on a sponsored podcast. Mr McGarry in recent weeks stepped aside from any operational involvement the Irish business and said he would concentrate on the UK business. He remains majority shareholder and a director.

Core has, however, so far not yet lifted its embargo on advertising on Maximum Media’s platforms, which also include Her.ie, despite dialogue between both sides. The creation of a new management structure is part of an attempt by Maximum to satisfy any concerns that may linger in the advertising industry.

Mr Cullen said Maximum was also seeking a new independent director with experience of the digital industry: “It is important that they are impartial.”

Mr Cullen said Maximum needed to “enter a phase of maturation” as a business.

“The level of senior management needed a step up. It is normal for start-ups to professionalise their management structure at some stage,” he said.

He said the business was attempting to turn the “negative into a positive” by remaking its management following concerns from the advertising industry.

“We just thought: ‘Let’s bring in a different type of leader. That’s what the business needs,’” said Mr Cullen. He said Mr McGarry was “100 per cent onboard” with Mr Feeley’s appointment, but “all decisions now rest with us as the management team”.

He is also a former finance director of the Mercantile hospitality group, and also worked for 13 years for Mr McKillen, including at his French vineyard, Chateau La Coste.