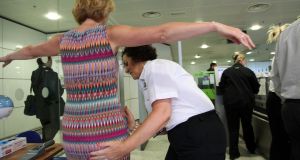 While airports provide security staff and equipment they must meet standards set by the EU, which the IAA enforces in the Republic

The move will result in the IAA charging the Republic’s airports five cent for every departing passenger for this service, a total of almost €2 million a year, industry figures estimate.

Dublin Airport, which hosts more than 30 million passengers a-year, will pay around €1.6 million of this total.

While airports provide security staff and equipment they must meet standards set by the EU, which the IAA enforces in the Republic.

The authority regularly audits and supervises airports to ensure that their safety checks and systems meet the standards. The new charge will pay for this.

DAA, the State company that owns Dublin Airport, may be able to pass the charge on to airlines.

It is open to the company to raise the issue with the Commission for Aviation Regulation, responsible for consumer protection, which sets the passenger charges that Dublin Airport levies on airlines.

The commission’s latest ruling, fixing the airport’s passenger charges at an average of €7.87 a head for the next five years, includes an “uncertainty mechanism” allowing DAA to discuss passing on the IAA charge amongst other similar costs.

It is understood that Aer Lingus, one of Irish airports’ biggest airline customers, has written to the IAA querying how it calculated the five cent a passenger charge.

The airline said on Thursday it was aware that the Minister was due to sign into law the regulation allowing the authority to charge for security supervision.

“The legislation provides the framework for assuring aviation security oversight and compliance into the future,” said Mr Kearney.

Mr Ross noted that other EU countries already charged for the service. “This regulation sets out a new industry levy in the form of fees payable by regulated companies,” the Minister said.