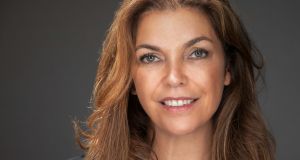 Elaine Brennan: “Irish people have a great reputation in New York and I’m grateful for the career I’ve been able to build here and for the people who have helped me along the way.”

Elaine Brennan “won the lotto” in 1994, when she was studying applied chemistry in her native Galway.

“My mother entered me into the Green Card Lottery without my knowledge. Looking back, her foresight was incredible, and I’m deeply grateful, especially taking into account how difficult it is to get visas now.”

With no further ado, Brennan and her friend headed to Miami after completing her studies.

“I got a job heading up the quality control department at a Royce Laboratories. It was a great start for a young Irish girl, who, looking back, was so green.”

Brennan and her friend threw themselves into the outdoor lifestyle, taking up scuba diving and skydiving at the weekends, while building their careers. After three years of sunshine and blue seas, Brennan headed north to Boston.

“Mobile phones were just becoming commonplace. Networking and reaching out to communities wasn’t the norm, so it was more difficult to find jobs, mentors and contacts. Back then, employment opportunities were found in the back of a newspaper.” Brennan says.

Nonetheless, a position at Metabolix, a bioscience company, which provides sustainable solutions to the plastic, chemical and energy industries transpired.

“It was affiliated with MIT so I was surrounded by amazing scientists and researchers. I was working in the R&D department and patented biodegradable chewing gum, which was acquired by a major multinational company,” she adds.” One would think, I’d be set up for life, but patents don’t pay well as it turns out.”

A five dollar paycheck for the patent saw Brennan call it quits and she never worked in chemistry again.

“I packed up and moved to New York. I wasn’t quite sure if I was going to go to medical school, so I got a job at a doctor’s office to think about what to do next.”

She applied to big pharma companies and subsequently got a job at Roche, the Swiss multinational healthcare company that operates worldwide under two divisions, pharmaceuticals and diagnostics.

“I worked as a clinical specialist, and was part of the marketing team for the blockbuster drugs for hep B and HIV. It was a pretty big deal at the time.”

Another big deal during that time was the terrorist attack on the Twin Towers. Brennan lived close to Ground Zero and, on the morning of September 11th, she drove past the World Trade centre that morning thinking: “What a beautiful day it was and how spectacular the towers looked. I had a meeting in Jersey and saw what unfolded from afar.”

Brennan’s father was the air traffic controller on duty that day in Shannon so for that and many reasons, it was a day the entire family “will never forget”.

It was during this aftermath of 9/11 particularly that Brennan began to understand the value of the diaspora.

“It was through my diaspora network, that I connected with Enterprise Ireland and became senior vice-president of their life sciences division in the US.”

One of the initiatives she created during this time was a platform called Gastroenterology Ireland, which brought together a cluster of companies, research and development, and leaders across Ireland and the US to help the Irish community to network and drive research collaboration and commercial opportunities.

When people come together, good things can happen, as Brennan was to find. “I got to connect with fellow Irish person, Michael Dowling, CEO of Northwell Health. We met through our involvement in various healthcare and Irish diaspora events and, when the opportunity arose in 2014 to join his team at Northwell, I jumped at it.”

Brennan joined Northwell Health to create Pharma Ventures, a group tasked with establishing an innovative approach to managing and forging partnerships with the pharmaceutical industry.

“In addition, I developed the international programme at Northwell Health which seeks to develop strategic relationships with international trade development agencies to give innovative companies an entry point and pathway into the US.”

She is currently one of the leaders of Northwell Holdings, the for-profit arm of Northwell Health, which develops and invests in innovative products, technologies and services.

“It’s a great job. I live downtown and I work in midtown Manhattan. New York, even after 20 years is incredible. I’m busy, and go to events at night after work, but I love it.”

Brennan says she still has a tight connection with Ireland and visits her son, who boards at Glenstal Abbey, during the year.

“Thankfully we’ve evolved from emigration and we travel back and forth regularly.”

Brennan says the streets of New York may not be paved with gold but the opportunities are plentiful if you’re willing to work hard and adapt.

“Irish people have a great reputation in New York and I’m grateful for the career I’ve been able to build here and for the people who have helped me along the way.”

1 Who are Ireland’s 17 billionaires?
2 My father in a nursing home wants to gift me his house
3 State subsidises public sector retirees to cover gap until State pension
4 Are there annual limits on inheritances or gifts to a child?
5 Swiss police suspect Davos plumbers of being Russian spies
6 Avolon executives share €27m in pay as revenues soar
7 O’Flynn company ‘mistakenly’ got go-ahead for Birmingham project
8 Q&A: Why has the pension age question suddenly become an election issue?
9 Corporate tax change is inevitable, says Donohoe
10 Health insurance: Switch often for your financial wellbeing
Real news has value SUBSCRIBE