Have we reached peak air travel?

Cantillon: The 1% decline in Dublin Airport passenger numbers might just be a blip 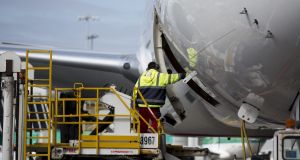 After more than 5½ years of steady monthly growth, the 1 per cent decline in passenger numbers for Dublin Airport in November came as a surprise.

Should we be worried? Or is it just a blip?

After drilling down into the data, it might just be a blip.

Firstly, the drop is driven by every region other than Europe – a crumb of comfort. Secondly, and more importantly, where declines did occur, there was an obvious explanation.

To and from the UK, for example, traffic in November was 2 per cent lower in the month than a year ago, but this follows what was already a mildly volatile year. And only a hermit monk with no access to the news would struggle to figure out why this is – Brexit.

Where North America is concerned, the fall in transatlantic passengers relates to Norwegian Air’s decision to end flights earlier this year as a result of constraints within its fleet due to the grounding of the Boeing Max 8 aircraft. Or so it said.

Finally, with regard to other markets, Cathay Pacific had to pull back on its flights because of unrest in its home market Hong Kong, while Hannon has suspended winter flights to Beijing.

While November was a laggard for Dublin Airport, that doesn’t reflect passenger numbers for 2019 as a whole. Traffic so far this year has risen 5 per cent to 30.6 million passengers while the volume of passengers using it as a hub to transfer to other destinations also increased.

The decline in November can be explained away while the Christmas period is sure to be extremely busy. We will have to wait for the early months of next year to see if there is any evidence of a slowdown in air travel at the country’s busiest airport.