‘I knew energy efficiency in construction would become a revolution’ 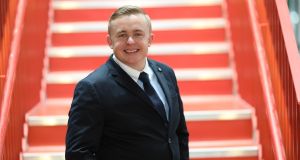 Since 2008, Conor Walsh has surfed the waves of the construction industry. During its most volatile periods, Walsh has adapted his trade to accommodate new trends, keeping him afloat in an industry he’s passionate about. With Encon, he’s targeting the retrofit and new-build energy-saving market, and is pushing the boundaries further with a new product in the coming year.

I knew energy efficiency in construction would become a revolution when I first entered this emerging market in 2009. I’m now seen as an advocate for this sector amongst my peers, as we would provide innovative services to a market that has gained a substantial place in both the new construction and retrofit markets of Ireland.

What’s been the biggest challenge that you’ve had to face?

My first attempt to hack the industry failed in 2012. It was like the recession double-dipped, it went from bad to worse. The people purchasing our products were generally retired people who saw the benefit in investing their pension fund to improve the energy efficiency of their house. When the market slumped, people just lost all confidence. Everyone just stopped spending completely, so we moved our model to the UK. It was going well there and, in 2013, we decided to take it back to Ireland and give it a go. We’d broadened our services. We took in new-build [construction] . . . with energy efficiency in mind, as well as retrofitting and, since then, we’ve flourished really.

What has been your major success to date?

For myself and my business partner, Robert Keohan, [it has been] going from becoming carpenters in 2008, to watching the industry collapse before our eyes, and then establishing our company in 2013. Now we are seen as a leading retrofit contractor in Ireland. Along the journey I also completed a BSc in quantity surveying in 2018, which is certainly something I’m also proud of.

What do you think the Government could do to help SMEs?

The initiatives provided by the local enterprise offices throughout Ireland are certainly paramount to the success of SMEs, and if the Government could give as much resources as they can to them it would certainly be very important.

Do you think the banks are open for business?

They have been for the last few years I suppose; I’ve a good relationship with my relationship manager in my local branch and we will obtain stocking loans if we need them on projects. I suppose that’s only in the last number of years and the value is small compared to what you could get from private investment. They are open for business but not to a level that is hugely supportive in a sense. I suppose they are still cautious and in uncharted waters in regards to Brexit.

As I say, my first business failed in 2012. I was young then, I grew the company a bit too fast but the sales weren’t there. I should have been a little bit more cautious in my approach, I might have been able to find my way through it and not have to close, but I learned a lot from it.

Whom do you admire most in business and why?

Richard Branson is certainly a businessperson I admire. He set up many companies from a young age, in emerging sectors, [he] succeeded many times. He’s also a fearless trader in many ways; I suppose it makes him quite extraordinary in that sense.

What’s the best piece of business advice you’ve ever received?

Someone interviewed me when I was launching my initial bid into this whole industry in 2009. At the time, he [the interviewer] didn’t really have confidence in my business plan because he was too focused on the construction industry and how it had collapsed. I met him recently and he just told me how proud he was of my achievements and that I had clearly followed through on my vision.

We’ll continue to deliver carbon reduction technologies to the housing sector and I will also be launching a new method of delivering housing units in Ireland and Britain in the first quarter of 2020. This is an advancement on how we build and insulate our wall structures, it’s a construction fixing and method.

The business has doubled its annual turnover in the last three years, which is certainly something to be proud of. I wouldn’t be in a position to put a value on it at this point in time; I’ve still got a lot to achieve in the industry, I believe we’ve a lot of boxes to tick yet!

€8m for Dublin city centre site with scope for 124 apartments