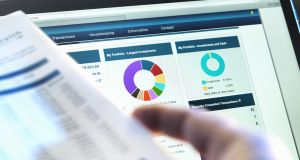 Until now, Minister for Employment Affairs Regina Doherty has consistently said the new pension system should be in place by the third quarter of 2020.

Plans for reform of the State pension have now been put back to 2021, Regina Doherty has conceded.

Until now, the Minister for Employment Affairs and Social Protection has consistently said the new system should be in place by the third quarter of 2020.

However, in an interview with RTÉ’s Seán O’Rourke, Ms Doherty confirmed that the issue had yet even to get to Cabinet. She said she hoped to get a memo to Cabinet early in January on her long-standing proposal to introduce a total contributions approach to State pension eligibility and to outline “where we will go from 2021”.

It is the first time the Minister has acknowledged that the new pension arrangement will not happen in 2020.

The Government has announced its intention to move to a system where eligibility for a full contributory State pension is based on accumulating 40 years worth of PRSI payments over a working life.

At present, contributions made are averaged over a full working life in a manner that can disadvantage people, generally women, who take time out of work to care for family, or for any other reason. It means that someone who started work as a student could get a far lower pension than a person who only started paying social insurance 10 years before retirement age.

The Minister’s plans may yet be further disrupted by the impending general election, as any new minister or government would likely look again at the proposal before proceeding.

More than 90,000 people, mostly women, who have retired since September 2012 have already had their pensions assessed under the proposed new total contributions arrangement.

In October, the Minister said in a answer to a parliamentary question that 94,244 reviews had been completed, with 54 per cent of the 53,080 women affected receiving an increased pension. Of 41,164 retired men, just 24 per cent had their pension increased.

One in five of those approved for higher pensions got a weekly increase of €30 or more, with a third getting between €10 and €20 more a week. Over a third got less than a €10 increase.